The Bold and the Beautiful returned on Wednesday with an all-new episode as Quinn (Rena Sofer) manipulated Liam (Scott Clifton) into recording a hurtful voice memo for Steffy (Jacqueline MacInnes Wood) while Wyatt (Darin Brooks) continued trying to get Steffy to fully commit.

Read on for B&B’s Wednesday, February 10, 2016 recap. Click here or on “Next Page” at the bottom to move ahead to today’s episode outcome.

Quinn Had Liam Record a Hurtful Voice Memo for Steffy 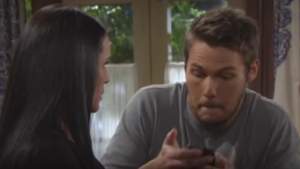 While Steffy continues growing closer to Wyatt in Liam’s absence, she still hasn’t been able to let go. To Steffy’s delight, Wyatt told her that he wanted to spend the rest of his life with her. However, as happy as she was to hear that, she told Wyatt that she wanted to verbally hear from Liam that they were through. She’s been trying to contact him to no avail. Up until this point, Steffy’s received two text from Liam’s phone saying it was over. What she doesn’t realize is that Quinn’s been the one behind the messages.

On Wednesday, Quinn gets Liam to contact Steffy, who picks up. Naturally, she wants to know why he disappeared the way that he did.

Inside her office, Steffy wonders why Liam hasn’t been answering his phone. Meanwhile, Quinn listens to Steffy’s voicemail in which she’s asking where Liam is and warning him that she’s getting serious with Wyatt. Steffy calls again and leaves another voicemail.

I don’t understand this. Where are you?”

Quinn tells Liam that she stocked the fridge with all his favorite stuff. Liam wants to know who called and asks her if she’s going to return it. Quinn says she’s been getting crank calls. Liam says the next time the person calls he’d like to tell them to back off from his wife. Quinn says that may be exactly what they need. Liam experiences a brief brain spell while Quinn tries instructing him on the voice memo he should leave. He records the following voice memo for Quinn to use:

“I’m only going to say this once. Stop calling, get a life, don’t ever call this number again.”

Later, Liam gets out of bed and finds himself in deep thought after looking through a magazine.