Million Dollar Listing Los Angeles stars Josh Altman and Heather Bilyeu are officially off the market. The couple exchanged vows on April 2 in front of family and friends in Aspen, Colorado.

Altman, 37, and Bilyeu’s wedding comes almost two years after they postponed their July 2014 nuptials. The couple feared the wedding had become more for their Bravo reality show than celebrating a milestone in their own lives. Altman proposed to his bride on the sixth season finale of Million Dollar Listing.

“Yeah, it turned into a story line as opposed to a wedding, and that didn’t sit well with us. It’s about a marriage, not just a wedding,” Bilyeu told Us Weekly.

Here’s everything you need to know about the newlyweds.

1. Altman and Bilyeu Had a Traditional Jewish Wedding

Altman and Bilyeu held their destination in Aspen, Colorado against the majestic backdrop of the Rocky Mountains. (Instagram/@thejoshaltman)

Altman and Bilyeu said their “I Do’s” under a traditional Jewish chuppah decorated with branches and white flowers to match the rustic Aspen scenery, according to Us Weekly. Despite the cold weather, the wedding took place outside at the St. Regis Aspen Resort in Aspen Colorado. Altman’s parents live in the Rocky Mountains town.

Guests kept warm under faux fur throws and sipping hot cider or hot cocoa. About 90 close family and friends attended the intimate wedding. Following the ceremony, they headed inside the Caribou Club lodge for the reception to dance and enjoy late night snacks such as mac and cheese balls, truffle French fries and pigs in a blanket as well as dancing.

Bilyeu wore a custom gown commissioned by Australian designer Nektaria. The dress was hand-sewn, hand-stitched and covered in 6,500 glass pearl beads. “I’m gonna feel like Cinderella,” she told Access Hollywood a few months before the wedding.

2. The Newlyweds Got Roasted at Their Rehearsal Dinner

The happy couple chose a non-traditional rehearsal dinner. Inspired by the Comedy Central roasts, Altman and Bilyeu roasted 25-30 of their close friends. The guests then got payback, roasting the bride and groom who took the brunt of their jokes sitting in giant thrones.

“We like making fun of ourselves because we’re in the public eye,” Altman told Us Weekly. His wife added, “It [was] everyone from the owner of our company to my college roommate to my biggest client to a family friend.”

3. They Postponed Their Wedding in July 2014 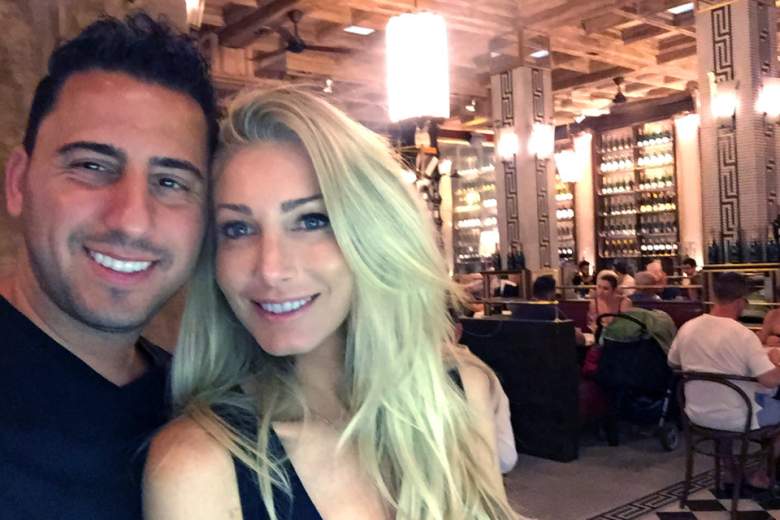 Bilyeu was actually relieved when she and Altman called off their wedding the first time. (Bravo TV)

Overwhelmed by the wedding planning and filming their Bravo TV show, the couple decided to postpone their original wedding date set in July 2014 only four weeks before the big day. The “It’s Your Move” author and his fiancé made the decision together and never broke up. Altman believed it was the “best thing” for their relationship, he told Us Weekly in October 2014.

Altman captured his proposal to Bilyeu in an episode of Million Dollar Listing. (Bravo TV)

Altman and Bilyeu met in 2010 while filming Million Dollar Listing Los Angeles at an open house held by his fiercest competitor, Josh Flagg. The top-producing agent at Douglas Elliman Real Estate Brokerage dated Bilyeu, a Las Vegas native, for three years before he popped the question during a walk through of one of his listings.

Altman went the extra mile and designed the engagement ring he gave to Bilyeu. (Bravo TV)

Altman’s mother Judy helped him pick out Bilyeu’s engagement ring, which he ended up designing himself. He proposed with a flawless D-color 5.5 karat sparkler set with over 370 individual pave diamonds and an 18-karat white gold band.

I have a pretty good eye for jewelry so I thought of what my dream ring would be for Heather. The jeweler drew it out and we made some changes and eventually I said, ‘Alright, perfect! Go for it! When he showed it to me, I flipped out—it was everything I had ever imagined.

The ring was so spectacular, Bilyeu almost thought it was fake!

“If I had the chance to actually go out and buy my own ring, this would have been it. It’s absolutely stunning,” she told Bravo’s The Daily Dish.

5. Honeymoon Plans and Babies to Come

Altman and Bilyeu plan to “mini-moon” in Cabo where they have vacationed in the past. (Instagram/@heatherbilyeu)

The newlyweds are planning to honeymoon in August on an African safari, but they also wanted to take a few days in Hawaii or Cabo for a “mini-moon” right after their wedding.

Another big step they may not put off for much longer is having kids. The couple already had a pregnancy scare this past season on Million Dollar Listing. Altman really wants to have children and to build a family real-estate empire.

Altman and Bilyeu are getting for kids by taking care of their three dogs, Lucky, Diego and Brady. (Instagram/@heatherbilyeu)