This week, episodes 6 and 7 of Bachelor In Paradise 2016 air and the drama continues. New cast members come into the mix, others leave and some are eliminated. To find out all the spoilers we could gather for the week, read on below, starting with tonight and tomorrow’s official episode descriptions:

TONIGHT’S OFFICIAL EPISODE SYNOPSIS: A frustrated bachelor continues to deal with the emotional breakdown of his crying ex who is unable to move on from him; four single ladies look to the remaining bachelor wild card for their chance to secure a rose.

TOMORROW NIGHT’S OFFICIAL EPISODE SYNOPSIS: A bachelor ends his relationship with a fickle bachelorette and leaves Paradise; a popular couple return to Paradise and deliver a date card that stirs up drama for two couples.

And, now that you’ve got some clues as to what to expect this week, read on below for the spoilers.

Paradise Is Hell for Jared Haibon & He Won’t Be Returning

Jared Haibon was getting along well until Caila Quinn showed up in Paradise and captured his heart. Unfortunately, Caila had told Jared’s longtime admirer Ashley Iaconetti that she would not date Jared. Caila and Jared began to pursue a romance, which ended up to be drama-filled when Ashley shows up. Ashley is devastated and continues to be devastated by the pair. But, Jared gets a bit of a slap in the face when Caila says she’s unsure about their relationship. When a new guy asks her out, Caila decides to take him up on a double date and while she’s away, Ashley continues to try to win over her longtime crush. ABC writes:

The second double date of the season sends the foursome on a party boat adventure. The physical intimacy is strong for one hot and heavy pair while another disappointed bachelor learns that his chosen date has been thinking about her other suitor and can’t wait to get back to him. Meanwhile, an opportunistic bachelorette takes advantage of her romantic rival being away on the date and makes her move to recapture her dream guy’s heart.

In addition, ABC has stated:

Driven by jealousy, the melodramatic bachelorette uses her friendship to plant seeds of doubt in the unsuspecting bachelor about the woman of his affection. Fed up, the usually collected bachelorette goes to confront the high-strung crier after learning of her sabotaging behavior. The frustrated bachelor tries to mediate between his friend and his love interest but is left wishing that someone would arrive to take the dramatic bachelorette off his hands.

What's next for Jared and Caila? ? #BachelorInParadise

Recently, Jared did an interview with Glamour and said that he will never go on Bachelor In Paradise again, so clearly, things do not go well for him in the love department this season. Jared told Glamour that he is still very good friends with Ashley, but didn’t say much about Caila. And, in terms of his not returning to the franchise, he explained:

This is my last Bachelor show. Another reason I wanted to go on was because I knew if I went on, this is it. I’m very happy that I went on, and this is absolutely my last show with the Bachelor franchise. Unfortunately, I hate saying that because I love the people that work here. I love coming into this experience and the possibility of finding love on such a grand scale. People say that it’s fake because everything is put on a pedestal and you have these dates that are incredible, but at the heart of it, the connections are very, very real.

On the other hand, Nick Viall once said that he was done with the Bachelor franchise as well, so there’s always hope that Jared changes his mind. Each week, more and more cast members arrive in hopes of finding love or lust on the show. The upcoming cast members who come aboard include:

And, the next girls who arrive include:

The girls may or may not all arrive until next week’s episodes. As for the men, Carl goes on a date with one of the twins, Brett goes out with Caila and Wells ends up sparking up a little romance with Ashley Iaconetti, who has been pining for Jared.

A Couple Breaks Up and Eliminations Continue

Of course, some people will be sent home this week, but there are also some issues within certain relationships and one man actually leaves the show. When Brett Melnick shows up, Izzy’s interest in him causes issues in her relationship with Vinny. According to Reality Steve, Vinny ends up calling it quits with Izzy and leaving the show because of it. Others who reportedly decide to just leave the show in upcoming episodes include Jared, Caila and Izzy. When it comes to Izzy and Vinny, ABC writes:

An enviable couple’s bond is tested when the tempted woman gives in to her attraction to one of the newest arrivals and tells him that he is her ideal man. The shocked bachelor is hurt when he learns that his ladylove is interested in getting to know another guy … The shattered New Yorker sits down to talk with his doubting bachelorette about the state of their relationship after she had admitted that she was attracted to a new arrival. During their tearful conversation, the crushed bachelor reveals how his feelings had been growing but her wandering eye has made it clear that the feelings aren’t being matched, and he feels he has no other choice than to end things between them and exit Paradise. Leaving the weeping bachelorette behind, he says his goodbyes to the rest of the cast.

In addition, Sarah Herron, Daniel Maguire, Ryan Beckett and Carl King do not receive roses from anyone, so they must leave Paradise. The Ferguson twins could have given out their roses, but they decide not to and eliminate themselves.

Ashley Iaconetti is actually eliminated when Sarah Herron gets the boot, but she apparently begs to come back … and the show lets her because we all love Ashley’s signature “ugly cry.” 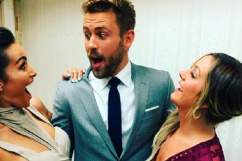