During his New York Fashion Week show on Thursday, the clothes by designer Marc Jacobs were not what everyone was talking about. Instead, it was the fake dreadlocks he decided to have his models wear. The models seen during his show included Gigi Hadid, Kendall Jenner, Adriana Lima and Karlie Kloss. Every model who walked the catwalk wore the fake dreadlocks.

Jacobs was quickly criticized for the decision, although some of the blame goes to hairsylist Guido Palau. When The Cut asked Palau if he thought of the accusations of misappropriation, he said he doesn't think of the politics.

"I don’t really think about that. I take inspiration from every culture," Palau explained. "Style comes from clashing things. It’s always been there — if you’re creative, if you make food, music, and fashion, whatever, you’re inspired by everything. It’s not homogeneous. Different cultures mix all the time. You see it on the street. People don’t dress head-to-toe in just one way."

Click through for photos from the controversial fashion show. (Getty) 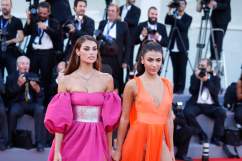