Season 2 of Mr. Robot concludes tonight, but if we know anything about this show, we are positive that it will end with more questions than it answers. So just how long will you have to wait before Season 3 begins and you can go back down the rabbit hole of crazy awesomeness that is Mr. Robot?

Mr. Robot was renewed for season 3 in mid-August, so we know the show is coming back. Live/same-day ratings were modest for the show about a month ago, but the show has been gaining in DVR ratings and it’s been holding strong in multi-platform/on-demand views, Deadline reported. The highly acclaimed show got another boost this week when star Rami Malek won his first Emmy, taking home Outstanding Actor in a Drama Series.

As far as when Season 3 is returning, you’ll have to wait quite a while. The USA Network hasn’t announced specifically when the show is returning, at the time of publication, except to say that it will return sometime in 2017. The premiere date will likely be in June or July, based on the last two seasons. Season 1 of Mr. Robot, which was only 10 episodes long, premiered on June 24, 2015. Season 2, which was 12 episodes long, premiered on July 13, 2016.

However, the show’s creator Sam Esmail apparently wants to start Season 3 later than that. He told Entertainment Weekly that he’d like a longer break between the two seasons than he had this last time, adding that the idea of having to bring a show back at the same time every year was “archaic,” especially if it costs the show quality. So some fan websites, like Fansided, are banking on a fall premiere rather than a summer premiere.

Work has already started on Season 3. Rami Malek revealed that he’s already filmed at least one scene for the new season. He made this revelation in the press room during the Emmys, while he was talking about the new season. 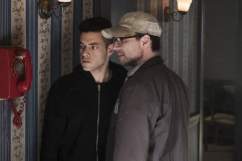