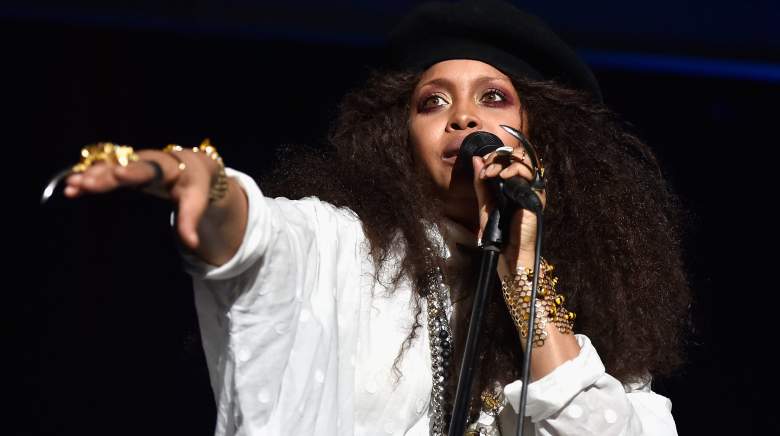 This weekend, Erykah Badu will be hosting the Soul Train Music Awards for the third time. Everyone is excited for the “On & On” singer to take the stage, especially after Badu promised that the celebration would be “everything!”. Badu has had a busy year, and it seems like nothing will be quieting down anytime soon– not only is she working on an EP with D.R.A.M, but the soul singer revealed to USA Today that she’s also working on her own album, as well.

Badu has three loving children who have supported her every step of the way. Her kids may not all be grown up, but they’re an important part of her life, and Badu has spoken about them all in various interviews. Who are her children? How old are they?

Read on to learn more about Erykah Badu’s children.

1. She Has Three Children With Three Different Men

Badu has three children with three different men. The father of her oldest child, Seven Sirius Benjamin, is rapper Andre 3000 from OutKast. Badu’s middle child is a girl named Puma Sabti Curry, whose father is West Coast rapper The D.O.C., and her youngest, a girl named Mars Merkaba Thedford, is seven, and the daughter of rapper Jay Electronica.

In a 2015 interview with Inquisitr, Badu discussed what it’s like being a mother. She told the outlet, “The best part of being a mom is that I get to grow with my children… The funniest thing any of my kids has said was when I moved into my first house. My son, Seven, who was 3, said, ‘What if somebody breaks in on us?’ I said, ‘Don’t worry, I got something to throw at his head.’ And he said, ‘What you gonna do, throw some money at him?”

2. Her Son Was Accepted Into Four Different Colleges in April

Erykah and Andre 3000’s son, Seven Sirius Benjamin, is 19-years-old. On April 25, Badu took to Twitter to reveal that Seven was accepted into four colleges. She wrote, “Makes parents feel good. Dream worked.” According to the Atlanta Black Star, Badu has said Seven Sirius plans to major in psychology, arts, and science.

Badu and Andre 3000 dated from 1995 to 1999, and though they split soon after their son’s birth, the two remain close today. Speaking in 2014 with Vibe, Andre discussed his relationship with his former ‘baby mama’. “Erykah and I are cool friends, man. We talk on the phone. She even asks my advice on relationships. She’s like a cool sister more than anything. The first thing people would think about us is, ‘Oh, they don’t get along.’ But there are always feelings when people grow apart. It’s something you have to get through. But man, we are cool.”

3. She Says Her Middle Child Is the Most Like Her

Badu recently spoke with ABC News about her family and children, and revealed that she will support her kids regardless of whether or not they decide to pursue a career in entertainment. The 45-year-old told the outlet that her youngest daughter is a gymnast and very into sports. She adds on, “My middle one, she is me. And I don’t know how that happened, but she, is atomically me, chemically me.” Badu says her son is most like his father.

Whatever they want to do, I’ll support them. They don’t have to be little mes. They can do whatever they want. I’m just grateful that they support me while I do this. Mama goes to work and they’re understanding and they’re grateful. This is the life they understand and know. If they choose to be an entertainer or performer I would support them wholeheartedly the same way they’ve supported me.

4. She Homeschooled Her Son

Badu homeschooled her son, Seven Sirius, through kindergarten and first grade. In 2009, the singer told People, “I wanted to give [him] special attention academically, to give him an advantage.” She added on, “He does not want to miss school or be late or be untidy or not have his things in order because that was a big part of how he was brought up. I don’t have any idea what Seven is going to choose to do, but he knows how to be disciplined and how to learn, and because of that he’s one of the top students in his school, and one of the top students in Dallas.”

Along with being very involved in her children’s schooling, Erykah has chosen a vegan lifestyle for them. She tells People, “When Seven was born I was a vegetarian and his father [Andre 3000] was too, so it was a natural progression for him in life to eat the things we eat… Puma is the same way. It’s just what’s in the house.”

5. She Birthed All Three Babies at Home

In her interview with People, Badu revealed that she birthed all three children at home. She tells the outlet that she preferred having her children in a “natural” environment, where there wasn’t too much fuss. “When a mother has found out she’s going to have a baby, her whole life — her diet, her mood, her energy — should kind of prepare her. After she prepares herself, fear is never a part of it. I expected success and health, so I made sure I surrounded myself with it. By the time I had my third baby, childbirth seemed a very natural part of life to me.”

Erykah also revealed that her Tweeting during labor with Mars was a dare. Questlove and The Roots bet she wouldn’t go on Twitter while she was labor, and Badu took on the challenge. Her first Tweet read, “Morning, I’m in labor.”