In an incident that will remind some of his old bad behavior, Justin Bieber was caught on tape punching a fan before a performance in Barcelona. In the above video, obtained by TMZ, Bieber is seen punching a man who reaches into his limo and tries to shake his hand.

It looks like the fan tried to touch Bieber’s face as he reached through the open window while Bieber was waving at other fans. After the male fan retreats from the limousine, he is seen with blood coming down from his lips.

Bieber is on his Purpose world tour. He is next set to play in Madrid on November 23 and has a date in Lisbon on November 25. He will perform in Miami Beach on December 31. The tour started in March and was timed to promote 2015’s Purpose.

The tour had been mostly event-free until this point. A few days ago, he did reveal that he got a new tattoo, which reads “son of god.” In October, he also walked off the stage in England when fans wouldn’t stop screaming during a show.

Despite being on the other side of the world, he still performed during the American Music Awards. His performance of “Let Me Love You” in Italy was broadcast via satellite during the ceremony on Sunday. 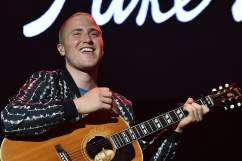