Tonight at midnight, the ball will drop in Times Square, NYC, with millions of viewers watching all over the country. Many have traveled to New York City in hopes of watching the spectacle in person. So, where exactly does the ball drop? Get the building address and location details below.

BALL DROP TIME: At 11:59 p.m. ET, the ball begins to descend until it finally rests at the bottom of a flagpole at Midnight.

BARRICADED STREETS: According to BallDrop.com, on December 31, 2016, the NYPD will close off the perimeter of Times Square at approximately 12 p.m. noon. If you wish to get passed the barricades, you must either be a resident of the area or have a ticket to an event inside the barricades.

VIEWING AREAS: The ball can be seen on Broadway from 43rd to 50th Street and on 7th Ave from 43rd to 59th Street, according to NYCTrip.com.

TIMES SQUARE RULES: For New Year’s Eve, special rules are in place. They include the following:
– No public bathrooms are available.
– Food is not provided, so be sure to bring your own.
– The Village Voice reports that alcohol, duffle bags, any backpacks, and umbrellas are not permitted.

THE BALL ITSELF: NYC.com reports that this year’s ball is a 12-foot geodesic sphere, which is actually double the size of previous Balls. It weighs 11,875 pounds and is covered with 2,668 Waterford Crystal panels. The ball is powered by 32,256 Philips Luxeon Rebel LEDS.

HISTORY: The first lowering of a ball for New Year’s Eve on top of One Times Square was in 1907 and there have been seven different versions of the ball made over the years. However, New Year’s Eve was first celebrated in Times Square in 1904, as reported by TimesSquareBall.net.

MEANING: The ball drop signifies an end to the year and the start of the new one.

SECURITY MEASURES: Because of so many terrorist attacks and incidents over the past year, security is extra tight this year. There will be approximately 7,000 officers on duty and Good Morning America reports that 65 sand and Sanitation trucks will surround Times Square. This is to prevent any trucks that may be used as a weapon at the scene. Chief of Department Carlos Gomez stated:

We’ll use metal detectors to scan individuals entering the observation areas. We will also deploy our full compliment of explosive detecting K-9s, both at the event and throughout our transit system. Detailed personnel will sweep hotels, theaters and parking garages.

Concrete blocks will also be used for protection.

There will be hundreds of blocker vehicles, including @NYCSanitation trucks, and concrete blocks helping to protect NYE in NYC pic.twitter.com/yo8wccl3cw 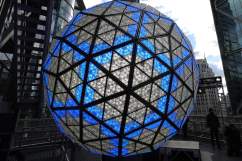 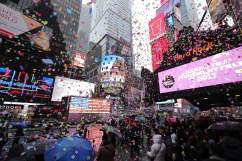