Another great session today ! Feels good to be writing again ! Thanks for today guys ??

Since the announcement of One Direction’s hiatus from making music as a group, fans of the UK boy band have been waiting patiently for the members’ solo work. We already have a full album from Zayn Malik, Mind of Mine, though he left the group about a year before the official hiatus. The group’s oldest member, Louis Tomlinson, looks like the next one to release a full album. His collaboration with EDM icon Steve Aoki, “Just Hold On,” has definitely excited fans since its debut, and other collaborators are adding to the excitement.

One of those artists is ROZES, aka Elizabeth Mencel, who recently spoke with J-14 about working with Tomlinson in the studio. As you can see from the Instagram photo above, it looks like time in studio with these artists is a good time.

ROZES told the publication that the time she spent in the studio with Tomlinson was “very fun.” She went on to describe the international pop star as “the sweetest person and very down to earth and very conversational and very funny.”

“It was really fun working with him, and he’s super-talented. We kind of dug into his life, what he’s up to. He’s obviously going through an emotional time and then recreating himself [as a solo artist], so it was fun to be his diary for the day.”

The “emotional time” that she refers to is the death of Tomlinson’s mother, Johannah Deakin, who passed away two months ago at the age of 42. According to ROZES, it “has made him grow up even quicker.”

Louis recently opened up to SIRIUS XM about his mother’s death, which you can check out right here.

Around the time of his mother’s death, Tomlinson performed with Aoki on The X-Factor, which TV personality and Tomlinson’s friend, Simon Cowell, called “brave.”

Jay is 100% looking down on Louis right now beaming with pride!! What an AMAZING performance!! ?? -H #ProudOfLouis pic.twitter.com/P5pQyvujeB

Aside from the tragedy in his life, Tomlinson is also a father, which, according to ROZES, has also added to him growing up fast, even though he’s only 25 years old. Tomlinson has a son named Freddie Reign with the LA-based Briana Jungwirth.

While ROZES is the most recent to sing Tomlinson’s studio praises, his “Just Hold On” collaborator, Steve Aoki, has only great things to say about the singer when it comes to the recording process.

“We worked on the song together from A to Z,” the producer said, according to Fuse. “Every step of the way Louis was involved in the process. He’s one of the most creative, talented people I’ve met.”

Aoki and Tomlinson recently performed their new song on The Tonight Show Starring Jimmy Fallon. You can watch this performance right here:

Though we’re only going by two collaborators’ quotes on Tomlinson’s new album, it definitely sounds like his solo record is going to be very much his own music – with plenty of help from such artists as Aoki and ROZES. Stay tuned for more updates on Tomlinson’s upcoming solo album, which has yet to be titled. 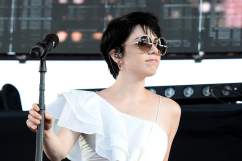