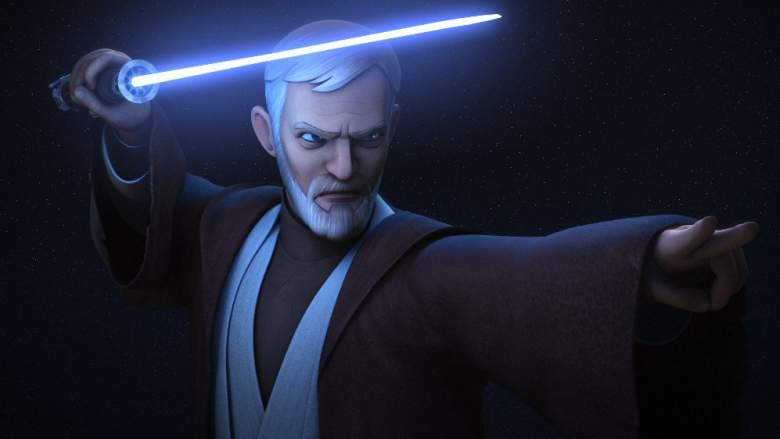 The moment we have all been waiting for ever since Darth Maul survived the Clone Wars is finally here. In this week’s episode of Star Wars Rebels, titled “Twin Suns,” Maul and Obi-Wan Kenobi finally face off on the sands of Tatooine.

“Twin Suns” returns us to the Force/Jedi plot of Rebels, which we haven’t visited since Maul appeared in “Visions and Voices.” The previous episode of Rebels, “Double Agent Droid” was a filler and other episodes have focused on Sabine’s decision to head to Mandalore and the build-up for the Phoenix Squadron’s attack on Lothal. That attack is being held back until next week’s season finale, because “Twin Suns” has some important business to get through first.

Here’s a look at all the action in “Twin Suns.”

The episode starts with the blazing twin suns of Tatooine baring down on a lost Maul, wandering the desert. He can feel Obi-Wan‘s presence, but he has no idea where his old adversary is. He refuses to let it all end by getting lost. He decides to tempt Obi-Wan’s “noble heart” to draw him out. Maul pulls out a piece of the Sith Holocron and uses it to call out to Ezra.

Why Would Anyone Want to Go to a Desert Planet?

After the title, we head to Atollon, where Ezra is trying to sleep. He is woken up by Obi-Wan’s message from Revenge of the Sith, when he told other Jedi to stay away from Coruscant. Ezra uses the Force to open Kanan’s quarters above the Ghost and spot Obi-Wan’s message. Then, the Sith Holocron flashes, as Maul’s voice screams “Kenobi!” Ezra is knocked onto the floor, and turns to see Kanan in the doorway. “Maul’s back,” he tells Kanan.

In the mission control room in Chopper Base, Hera asks Kanan what this could all mean. Kanan’s not too sure, but Ezra thinks it proves that Obi-Wan is alive and needs help. Rex reminds him that he wishes General Kenobi was still alive, but Senator Bail Organa has the Rebellion convinced that Obi-Wan is dead.

“Maybe he was wrong,” Ezra says. He thinks this is a sign that Maul is close to finding Obi-Wan. Hera tells him that it could have just been a broken recording. Then, Kanan reminded Ezra that the last time he heard Maul’s voice (back in “Visions and Voices”), Maul manipulated him. Still, Ezra wants to go to Tatooine so he can check things out. (How exactly Ezra figured out that Obi-Wan was on Tatooine went unexplained. The holocron in “Visions and Voices” showed him that Obi-Wan was on a planet with two suns, but since there are other planets in the Star Wars universe, Ezra and Kanan couldn’t say for certain that the planet was Tatooine.)

Hera pulls Ezra to the side. She tells him that she really needs him for the Lothal operation because he knows Lothal better than anyone else. Ezra tells her to think about what Obi-Wan could do for the Rebellion. “If he was alive, do you think he would be hiding on some backwater world instead of helping us?” Hera says. (Of course, that’s exactly what Obi-Wan is doing.) Hera insists that he stay so he can train for the attack. Ezra appears to agree, telling her that he wants to help Lothal more than anyone else and walks away.

On the next day, Ezra delivers munitions for the A-Wings. He tells another engineer that AP-5 ordered them to be delivered. The engineer tells him that the A-Wing trainer ship can run without being fully loaded. While the engineer is checking the manifest, Ezra sneaks into the trainer. He jumps in, and the engineer tries to stop Ezra, but he zooms away from Atollon instead. “Hera, I hope you can forgive me,” he says.

The Middle of Nowhere

After the break, Ezra arrives at Tatooine, the “middle of nowhere.” Chopper sneaked onto the ship and surprises Ezra. He tells the droid that he didn’t want anyone else from the Ghost team on the trip. Chopper reminds Ezra that he can take care of himself. Since Chopper is there already, he has to come along.

Ezra lands on Tatooine at night, using the holocron pieces to get close to Obi-Wan. The pieces activate and guide Ezra to a canyon. After landing, Ezra tells Chopper to stay at the ship. As he starts walking away, he goes towards a piece of the Sith Holocron. “Now you see,” says Maul’s disembodied voice.

Ezra realizes this is a trap and runs back to the ship, which is now being attacked by Tusken Raiders! He uses the Force to push off one Tusken from the ship so Chopper can escape. While Ezra fights on the ground, Tusken snipers shoot at the A-Wing, destroying Ezra’s ship! After the explosion, we see Maul kill the Tuskens, but Ezra assumes the explosion scared them off.

The two decide to go forth into the desert and walk all night. In the morning, they reach a barren sea of sand. Ezra and Chopper argue about going straight into an area where the sun will bear down on them without any cover, but they are interrupted by Maul’s voice. Ezra sees the shadow of Maul in the sands. He asks Chopper if he sees Maul, too. But when he looks back, Maul is gone. The holocron pieces tell Ezra to push ahead, and he tells Chopper he can go find a settlement and possibly call home. After looking back and forth, Chopper decides to follow Ezra.

Despite a sandstorm, Ezra keeps moving ahead. Maul’s voice tells him to draw Obi-Wan out. After the storm, Chopper begins slowing down and loses power. Ezra kneels down, shaking Chopper. “This is my fault. I should have just stayed home,” he says. “I don’t know what to do.”

“He is dead. He is dead,” Maul’s voice tells Ezra. “You led me to him. You failed your friends. You will die!” Ezra believes this is Maul telling him what will happen in the future if he doesn’t find Obi-Wan. Maul then suddenly appears, and Ezra lunges at him with his lightsaber. But there’s no one there for Ezra to slice. He hears Maul laugh as there’s a fade to white.

A mysterious figure picks up finds Ezra. Ezra looks up and then closes his eyes.

From a Certain Point of View

That night, Ezra wakes up to find Chopper plugged in and powering up by a fire. A Dewback growls beside him. “You’re in the wrong place, Ezra Bridger,” Obi-Wan tells him. (Stephen Stanton, who voiced several characters in The Clone Wars and Rebels, does an admiral impression of Sir Alec Guinness.)

Obi-Wan tells him that he’ll help Ezra leave Tatooine. But Ezra tells him that he came here to warn Obi-Wan and help him fight Maul. Obi-Wan knows all this though. “One doesn’t survive as long as I have by being foolish or unprepared. Maul is an old adversary, and a persistent one at that,” says the man who first thought he killed Maul over 30 years ago on Naboo. (Usually, slicing a person in half is enough to kill them, but not when you’re a Sith!)

Ezra insists that he helps Obi-Wan fight Maul because he’s convinced that Obi-Wan is the answer to defeating the Sith. “The holocrons told me!”

“The Rebellion needs you. We need you to defeat the Empire,” Ezra says.

“What you need, you already have,” Obi-Wan tells him. “Unfortunately, you seem to be letting it all go.” Obi-Wan explains to Ezra that Maul has tricked him once again. He used the holocrons to lead him to Tatooine. Obi-Wan explains that Maul used Ezra’s drive to do good to help him commit evil. Obi-Wan tells Ezra that he should never have come to Tatooine.

“But the holocrons… they tell the truth,” Ezra says.

“Do they? The truth is often what we make of it. You heard what you wanted to hear, believed what you wanted to believe,” Obi-Wan, the master of manipulating the truth so he doesn’t have to tell a kid that his father is the second-most evil person in the galaxy, tells Ezra. The only person who gained anything by Ezra going to Tatooine is Maul.

Maul the arrives and Obi-Wan tells Ezra to leave. Ezra wants to help, but Obi-Wan says he must “mend this old round.” Ezra agrees to leave, taking Obi-Wan’s Dewback. “See you soon, apprentice,” Maul says as Ezra turns away.

With our main Rebels hero out of the picture, the two old enemies goad each other on. Maul’s anger explodes and he turns on his lightsaber. “Why have you come to this place? Not simply to hide. Oh, you have a purpose here. Perhaps you are protecting something. No. Protecting someone,” Maul says.

At that point, Obi-Wan finally turns on his lightsaber. Maul charges at Ob-Wan, who swings and slices Maul’s double-bladed weapon in half. But it was also a fatal blow, and Maul falls to the ground. Obi-Wan catches him just before he lands.

“He will avenge us,” Maul says as he dies.

Next, Ezra flies Maul’s Mandalorian shuttle to Atollon. When he arrives at the base, he tells his friends that they won’t be hearing from Maul again. He apologizes to Hera and tells her he was wrong. “This is where I’m supposed to be. You’re my family… and we should go home.

The episode ends back on Tatooine. We find Obi-Wan riding a Dewback over to the Lars Homestead. Aunt Beru yells for Luke and we see a young boy running towards the home. As John Williams’ Force theme plays, the credits roll.

“Twin Suns” came to a sudden ending with a quick death for Maul. This probably reflects the fact that both men are much older than even when they last fought in The Clone Wars. Remember, Rebels is now about less than three years before A New Hope at this point. Still, you wish the fight would have lasted at least a little longer than one swing of Obi-Wan’s lightsaber. Then again, it’s clear that his fighting style changed, getting closer to the more stoic style we see in A New Hope.

Season Three of Rebels ends on March 25 with the two-part “Zero Hour.” In the episode, Phoenix Squadron finally attack Lothal, but Grand Admiral Thrawn has plenty of surprises in store for them. 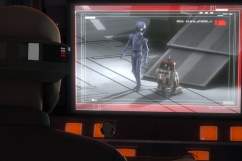