Kylie Jenner hasn’t been single for very long, but it looks like that hasn’t stopped her from cozying up to hip-hop artist Travis Scott.

The alleged couple were seen partying together at Coachella this past weekend, and, according to People, were also seen at a Moschino X Candy Crush party on April 15th. “Kylie and Travis made their way to a private table, where they were joined by friends,” says People, “After five minutes of being in a very crowded space, Travis got up and left the table, and Kylie followed him out with her friends following close behind her.”

According to a source for Hollywood Life, “Travis thinks Kylie is smokin’ hot, and he loves all the attention that comes along with hooking up with her, but he’s a player. He’s one of those ‘hoes in different area codes’ types.” The source went on to reveal that Scott doesn’t have much respect for Jenner’s ex, as “He and [rapper] Tyga have a bit of a rivalry, so he loves the fact that Tyga’s long term girl is now hanging out with him on the regs.”

While it remains to be seen whether Jenner and Scott will become an official couple, it is clear that the rapper’s dislike of Tyga is informing his current relationship. This has been proven in the past, as Scott has tweeted out mocking messages and memes regarding Tyga and his lengthy, troubled romance with Jenner over the years. “Tyga taking another L,” he wrote in November of 2016, not long after he retweeted a video of Nick Cannon mocking the rapper on the comedy series Wild ‘N Out. Check out both below.

This isn’t the first time Scott (born Jacques Webster, Jr.) has been romantically linked to a celebrity. In 2016, Romper reported that the “Pick Up The Phone” rapper was seen with Rihanna on multiple occasions, including New York Fashion Week. Scott also served as Rihanna’s opening act on tour and a musical collaborator on her album Anti. And while an insider for E! News claimed that the couple were” officially dating” and that “it’s very serious,” the alleged tryst ended before it was ever confirmed to the public. 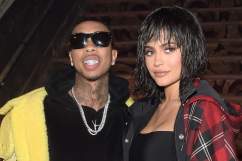