What could possibly be more offensive than singing about former President Barack Obama being an Islamist Jew? Singing about “Boobs in California,” at least according to Titus. That’s the latest catchy song in Netflix’s Unbreakable Kimmy Schmidt that Tituss Burgess’ Titus Andromedon character is stuck singing. You can hear the song in full above.

The song is featured in the episode “Kimmy Goes to College!,” where Ellie Kemper‘s Kimmy Schmidt uses an app to find little chores that people won’t do themselves so she can earn some money. Titus decides that he can use it too, and quickly finds a job as a backup singer for Gordy (played by 30 Rock‘s Judah Friedlander, who looks unrecognizable without a hat on!).

After impressing Gordy by singing lines in several offensive songs, Gordy offers Titus the chance to sing lead on a brand new song. Titus is at first disgusted, so he calls Lillian (Carol Kane) to get some advice. She tells him that he has to do it. He has to take the chance for his big moment on the stage, no matter what the song is.

And that song turns out to be “Boobs in California,” a two-minute ode to the “cowabunga lifestyle.” At the end of the episode, we learn that the song has become a smash hit in dance clubs in Tokyo! 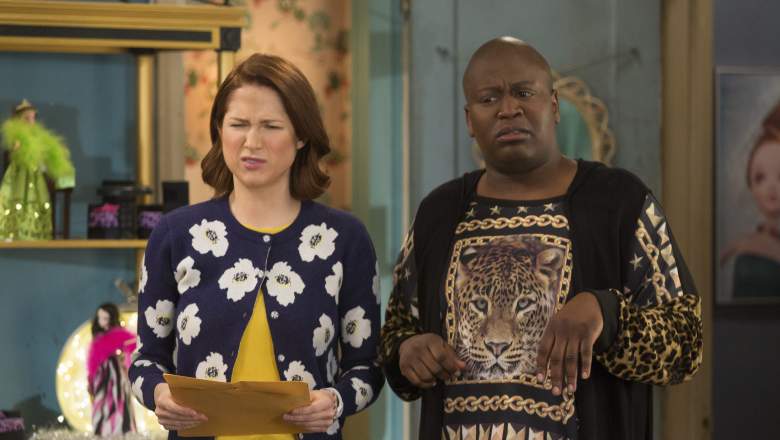 This song is hardly Titus’ first or best song in the series. The best remains his first viral sensation, the unforgettable “Peeno Noir – An Ode to Black Penis” from season one.

Season three also kicked off with Titus’ incredible tribute to Beyonce’s Lemonade. He recorded a new set of lyrics to go with “Hold Up” after he thought his boyfriend was cheating on him.

In a 2016 interview with Vanity Fair, Burgess said his vocal hero is soprano Renee Fleming. One time, he even got to sing for her. This was followed by “a pedagogical conversation that she prompted,” Burgess recalled. “She said, ‘How do you produce that noise?’ And I started to talk her through my process. I couldn’t believe we were having this conversation.”

Season three of Unbreakable Kimmy Schmidt is now available on Netflix. The show also stars Ellie Kemper, Carol Kane, Jane Krakowski, Jon Hamm, and a whole roster of other stars who have worked with Tina Fey.