Miss Minnesota – She says we are a generation with the highest student loan debt in history. This is something she would like to change.

Miss Illinois – What she says makes her unique is staying true to who she is and what she represents in her life.

Miss South Carolina – She says that whatever you believe you are, you can be and this goes for anything.

Miss District of Columbia – She says that she lives a life where growth and comfort do not co-exist. She says in order to grow you must get out of your comfort zone.

Miss New Jersey – She says that the American Dream can make anything happen and she says that she is set out to change the world.

Next up is the question round.

Let’s get into what each woman had to say when put on the spot.

Miss Illinois had to talk about women’s rights. She said that women should not be afraid to speak about their problems or issues openly.

For Miss South Carolina, she had to talk about teen suicide. She said that people who commit suicide feel that their voices are not heard and she says that we need to set up counseling and other resources in order to eradicate these problems.

With Miss New Jersey, she had to talk about being hyper-aware on social media and its effects on people. She said that there are both negative and positive sides of social media and she says that she, herself, has been a victim of cyber-bullying.

So, which of these women made it into the final three with their answers? Miss DC, Miss Minnesota and Miss New Jersey.

And, after the final question round, comes the final words and final looks, before the reveal of the new Miss USA 2017. 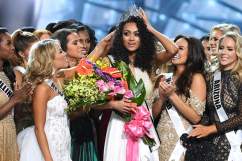