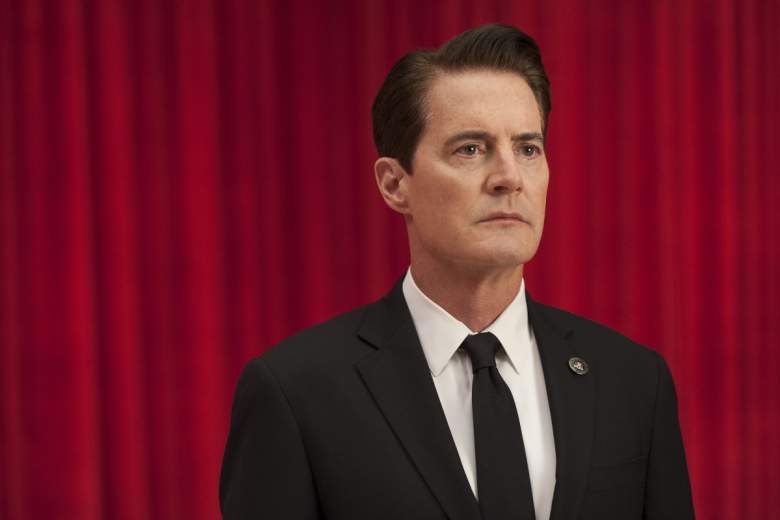 The Twin Peaks premiere was a trippy masterpiece that left viewers wondering what on Earth could possibly be going on, in typical David Lynch style. As some fans have pointed out, the first two episodes really had more of a David Lynch “Fire Walk With Me” kind of feel than an “original series” feel. But whether fans loved the premiere or are just plain confused, they’re happy the show is back after 25 years.

Here are some top theories and explanations about the premiere. Of course, some things are just unexplainable, but we’ll delve in and explain what we can. After you read this article, leave a comment at the end of the story and let us know your thoughts.

This article has spoilers through Episodes 1 and 2.

Which Cooper Is Real?

So, the Cooper we see in the “real world” with the long hair is actually Cooper’s doppelganger, controlled by BOB. (Read more about BOB here.) From now on, we’ll call him Not!Cooper. Meanwhile, the Agent Cooper we know and love has been stuck in the Black Lodge/Red Room for 25 years. His doppelganger took his place in the real world. And now it seems that the spirits/demons are letting Cooper out of the Black Lodge because Not!Cooper is getting out of control.

This is probably a good time to also mention a few things that were said throughout the episode that we likely need to keep track of. The Tree said: “253 Time and Time Again” before telling Cooper to leave right then. And at the very beginning, Cooper was told: “Remember 430” and he was also told about “Richard and Linda” before he faded out.

What Was the Deal with the Glass Box?

The Glass Box appears to be some kind of extradimensional portal that connects to the Black Lodge/Red Room. But it’s unclear exactly how it works or, when it was set up, who it was supposed to catch.

The glass box experiment did a lot of damage (to say the least), but it also brought back (or at least attempted to bring back) Agent Cooper from the Black Lodge. The experiment involved having cameras filming the box at all times, and a person was hired to watch the box and change out the flash drives of the cameras whenever they got full. (Did any of that job kind of remind you of Desmond in the Swan Station on Lost?) The whole thing is being funded by an unnamed billionaire who is apparently a pretty harrowing person to work with.

The glass box worked (to some extent.) Normally, a person can’t leave the Black Lodge until their doppelganger comes back. But when Not!Cooper refused to go back when he was supposed to, The Man From Another Place (aka Tree) decided to find another way to send Cooper back to the real world. He was supposed to just jump through a special opening, but the Tree’s doppelganger showed up and tried to “non-existance” him. When he fell through the non-existence portal, he ended up in the glass box (but he couldn’t get out.) Later, he’s gone when the student and Tracy come back to the room. But another entity comes to the box instead and breaks out, killing them both.

The running theory is that Not!Cooper was the billionaire who funded the box, and he built it to capture Cooper when he inevitably appeared after Not!Cooper decided not to go back to the Black Lodge. Other fans think the entity that arrived after Cooper was either the Tree’s Doppelganger or some distorted version of Laura Palmer, after she was taken from the Red Room.

What Happened to Laura Palmer? 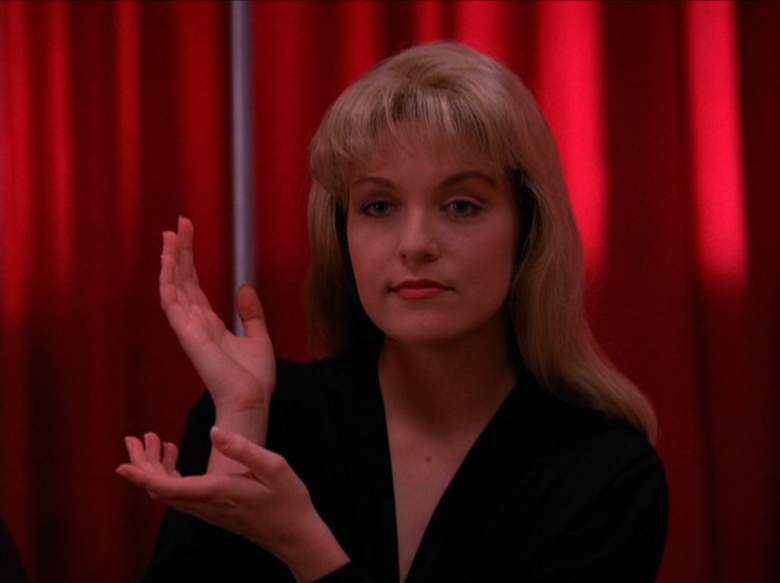 It’s unclear exactly what happened to Laura Palmer (or, more accurately, the entity who is “kind of” Laura Palmer except sometimes her arms bend back.) She explained to Cooper that she wasn’t exactly Laura Palmer, and then removed her face like it was a mask, showing that she was filled with a bright, white light.

That moment in #twinpeaks when Laura Palmer opens her face to reveal the light and you're sitting there like… well alrightee then pic.twitter.com/kSa6D7g0bQ

After showing her truth face, she kissed Cooper and whispered in his ear, just like she did when he dreamed of this happening to himself in the future.

It’s possible that the bright light in her face indicates she’s now some kind of angelic being. (Remember, in Fire Walk With Me, an angel did visit her and take her away.) The bright light within her may also show how she stood strong against BOB and was never possessed by him. She may be one of the only “pure” things in the Red Room. Or at least, she was until she was snatched away. It’s likely that Laura Palmer actually belonged in the White Lodge, but only visited 25 years later to send a message to Cooper.

What Is So Important About the Principal Who Killed Ruth Davenport?

Meanwhile, a weird murder happened in Buckhorn, another small town. Two people were murdered: the high school librarian (Ruth Davenport) and another person not yet identified. Ruth was shot through the eye and killed. The high school principal Bill Hastings’ fingerprints were all over Ruth’s home, implicating him.

The Principal dreamed about killing Ruth, but didn’t remember actually doing it, even though there was a block of time in his evening unaccounted for that overlapped with her murder. His wife, Phyllis, was having an affair with the attorney George and was actually happy that he was in jail. When she got back home, Not!Cooper shot her in the eye and killed her with George’s gun, apparently intending to frame George. Since Ruth was also killed by being shot through the eye, it appears that the Principal didn’t really kill her but was framed. Either that, or he was briefly possessed by BOB, who killed her, since that’s apparently his MO.

Is the principal possessed by bob? #TwinPeaks

After Phyllis visited her husband in jail and they fought, a weird demon like burnt creature was seen sitting in the jail two cells down, listening. Then he faded out and his just “wooshed” into the air and floated away. Maybe that was some BOB spirit listening in. Or maybe not. It’s hard to tell in the world of Twin Peaks. It was definitely creepy, though.

Where Was Michael Anderson? (The Man From Another Place)

Many fans noticed one conspicuous absence in the episode: The Man From Another Place (aka Michael Anderson.) He was replaced by a crazy electric tree with a brain-like thing on top (and then an even crazier doppelgänger version!) We were told the tree was the “evolved” arm. In Fire Walk With Me, we learned that the MFAP was the arm. So it looks like after 25 years, he turned into a bizarre looking brain-tree. Interestingly, he even told Cooper 25 years ago: “When you see me again, it won’t be me.” So this evolution of sorts was imagined even back then. 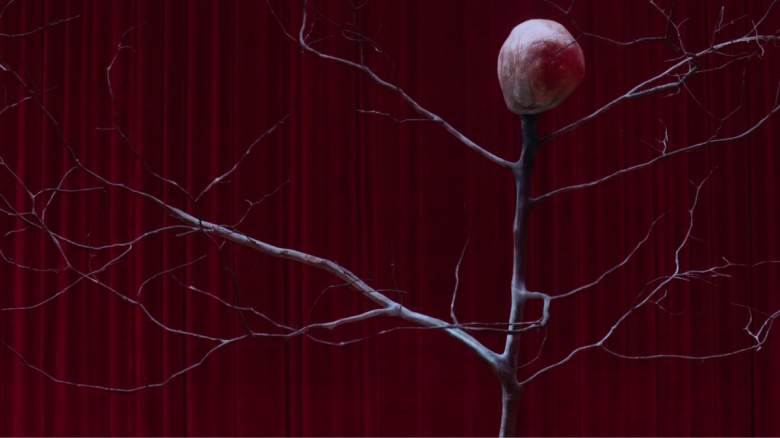 But why did the actor really not return?

Well, it’s likely that Anderson wasn’t invited to the revival because he said some pretty terrible things about David Lynch on his Facebook page. About nine months ago, he uploaded a photo to his Facebook profile and added a caption with a string of unfounded accusations against Lynch. The post was later taken down, but the damage was likely already done and pretty permanent.

Not!Cooper, the Secretary, and Phillip Jeffries

I'm not counting Phillip Jeffries, because he was voice only. #twinpeaks pic.twitter.com/dtfkc3uk8o

Not!Cooper is on some kind of important mission. He met with Ray earlier, telling him that he needed Ray to get information from Principal Hastings’ secretary. But Ray had other plans. He and his girlfriend were hired by someone for $500,000 to kill Not!Cooper. Instead, Ray took off (possibly with the secretary’s information) and claims he was apprehended and taken into custody at Yankton Federal Prison. Not!Cooper later got the schematics for the prison.

Not!Cooper really, really wants whatever information Ray has. He explains to Daria, before killing her, that they were some kind of coordinates. He then showed her a card with a strange dark figure on it and said, “This is what I want.” That figure is likely some kind of alien, possibly whatever came through the glass box after Cooper.

Later, Not!Cooper gets out a briefcase with a strange black box attached and makes contact with someone he thinks is Phillip Jeffries. In case you don’t recall, Jeffries is an FBI agent who trained with Cole and disappeared in Buenos Aires briefly in 1987, before reappearing in 1989 in an elevator in the Philadelphia FBI office (in Fire Walk With Me.) He talked to Cole about someone named Judy and Cooper. He talked about where he had been, but it didn’t make sense. According to a deleted scene, he reappeared in 1987 after that moment and wasn’t seen since.

But Jeffries wasn’t the person Not!Cooper was talking to. The person said:  “You met with Garland Briggs…” the person says to him. “I just called to say goodbye. You’re going back in tomorrow and I will be BOB again.” It’s unclear exactly who this person is. Could it be Gerard?

James Is Not Cool

Shelly, what the hell. You're one of my favorites. Don't betray me like this. #TwinPeaks pic.twitter.com/fIZ6ZVvbSD

And finally, the most important point to clear up from the premiere. At the end, we saw some familiar faces at the Bang Bang, enjoying a night out. Then Shelly saw James and commented that he had always been cool.

The best part of the first two #twinpeaks episodes was the news that James doesn't talk much anymore. 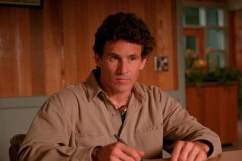 Why Isn’t Sheriff Harry Truman on ‘Twin Peaks’? Where Is Michael Ontkean? 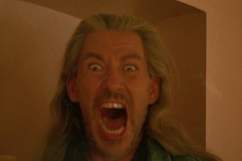