Beyonce and JAY-Z welcomed boy-girl twins last month. But while the couple has been focused on life as a family of five (Bey and JAY are also parents to daughter, Blue Ivy), the media has been busy trying to keep up with things going on outside of the couple’s private life.

Here is what has recently transpired.

Over the past few weeks, an apparent feud between Kanye and JAY-Z has erupted with numerous reports suggesting that the two rappers are no longer friends. According to Page Six, this started several months ago. The “feud” bubbled over when West spoke out during his concert in Inglewood, California, earlier this year.

With lyrics like, “This ‘f - - k everybody’ attitude ain’t natural” and “You ain’t the same,” the site claims that the first track on 4:44 is in direct response to West and the problems that the two men have faced over the past year or so. Some say that the feud between the two men is actually because West wants to be close friends outside of the music world — and he wants their wives to be close as well.

“[Kanye’s] rant was really about Kim and Beyoncé not being BFFs. Kanye is frustrated that his wife does not have a better relationship with Beyoncé. He wanted to put that pressure on Jay. It’s like, ‘We’re cool and we do business together, and now our wives should be friends?’” a source told Page Six.

And things have only escalated from there. Last week, Billboard announced that West had broken his deal with Tidal over a “financial dispute.”

“A source close to Kanye West has confirmed that Tidal’s exclusivity rights have been terminated based on what is alleged to be Tidal’s failure to honor its financial obligations,” Billboard reported on July 6.

And now, the media is trying to create a feud between the rapper’s wives.

There have been reports that West’s wife, Kim Kardashian, and JAY-Z’s wife, Beyonce, are sort of in the middle of this Kanye vs. JAY-Z thing. Sources told Heat Magazine that Kardashian sent Beyonce some gifts for her newborn twins and Beyonce actually rejected them. However, Gossip Cop reported that no such thing actually happened.

“We’re…told that this supposed incident involving discarded baby gifts simply ‘never happened.’ Of course, the tabloids are often trying to create a fake rivalry between the two famous women, so this latest bogus example comes as no surprise,” Gossip Cop clarified on July 7. “There have been numerous similar stories alleging a feud between the singer and reality star, but the narrative is entirely false,” the site added. 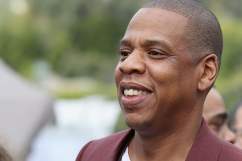