Dancing With the Stars know Karina Smirnoff as a pro dancer on the show, while Bachelorette fans know Chad Johnson as one of the franchise’s most infamous villains. Together, these two are cast-mates on season 2 of the reality show Famously Single and they both seem to find each other attractive. In fact, it appears that the two carry on a bit of a romance on the show. Smirnoff’s jealousy even creeps up on her during an episode or two.

But, it looks like both stars are presently single, but Johnson has confirmed to People that he is dating model Zoe Baron. When talking about his relationship with Baron, Johnson dished:

I do have a girlfriend right now. We’ve been dating off and on I think two or three months and I think we made it official like two weeks ago … So happy. On a scale from one to happy, I’m totally happy.

As for how the couple met, Johnson said that Baron reached out to him via email to ask him about fitness tips and when they went on their first date, Johnson said:

We actually just met up at a big seafood place and just had some drinks and linguine.

You can check out a pic of Johnson and Baron below.

When u & bae accidentally match

Recently, Johnson and Smirnoff did some press appearances for the show and Smirnoff posted a photo, saying that, “Great to see these guys again. Missed them.” In the photo with Smirnoff was Johnson and fellow cast member Dorothy Wang. Clearly by Smirnoff’s statement, she and Johnson haven’t seen each other in a while.

In the past, Smirnoff has been involved in some high-profile relationships and she’s been engaged three times. One of the engagements was to fellow DWTS dancer Maksim Chmerkovskiy, who is marrying pro dancer Peta Murgatroyd. Smirnoff also previously dated Mario Lopez, was engaged to Major League Baseball pitcher Brad Penny and she was also engaged to entrepreneur Jason Adelman. Smirnoff suffers from attention deficit hyperactivity disorder and says that she has a problem with commitment. She also says that she finds herself in relationships where the men want her to stay at home. 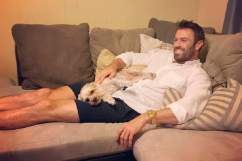 Chad Johnson Craps His Pants & Is Kicked Off Right Away on ‘Bachelor In Paradise’?