I wanted to do some shows that were as personal and as intimate as possible. I chose Broadway for this project because it has the beautiful old theaters which seemed like the right setting for what I have in mind. In fact, with one or two exceptions, the 960 seats of the Walter Kerr Theatre is probably the smallest venue I’ve played in the last 40 years. My show is just me, the guitar, the piano and the words and music. Some of the show is spoken, some of it is sung. It loosely follows the arc of my life and my work. All of it together is in pursuit of my constant goal to provide an entertaining evening and to communicate something of value.

Springsteen’s recording career spans over 40 years, beginning with 1973’s “Greetings from Asbury Park, NJ.” He has released 18 studio albums, won 20 Grammys, won an Oscar, been inducted into the Rock and Roll Hall of Fame, received a Kennedy Center Honor, and was MusiCares’ 2013 Person of the Year. In other words, he’s the Boss. 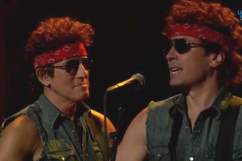 Read More
Breaking News, Broadway, Bruce Springsteen, Celebrities
Bruce Springsteen announced that he will be making his Broadway debut this fall. Find out more about the shows and ticket information here.