Teen Mom 2 star Kailyn Lowry recently gave birth to her third child, with a third baby daddy, named Chris Lopez. And, when her ex-husband Javi Marroquin found out about her pregnancy, he was very upset. But, it looks like Marroquin has moved on and is happy with new girlfriend Lauren Comeau, who hails originally from Maine, but lives in South Carolina. Or, is he? The Hollywood Gossip recently reported that Marroquin has deleted Comeau’s photos from his Instagram account. But, Marroquin said there’s a very good reason for deleting the pics and it’s not that the couple split. Marroquin told THG:

Everything’s great, I’ll be seeing her tomorrow and spending the weekend with her … This one’s definitely a keeper I can tell. We wanted to keep as much private as possible so I thought by deleting the pictures people would stop commenting.

The couple apparently met at a mutual friend’s wedding where Comeau was the maid of honor. And, for fans who are hoping to see Comeau appear on Teen Mom 2, they may be waiting a while. Marroquin explained to Radar Online:

And, Comeau talked about the fact she has not yet Marroquin’s ex Kailyn Lowry. Comeau revealed:

I’ll meet her when the time is right and when they both think I need to. I 100 percent respect her as Lincoln’s mom so when the time comes, I think it’ll go over just fine.

It’s easy for Comeau to currently steer clear of Lowry because her relationship with Marroquin is long-distance. Comeau talked to Radar Online and said:

Distance isn’t ever easy. But we have a lot planned and busy schedules in between so I think we’ll handle it well.

She also dished on what happened when she first met Marroquin, saying:

We connected through a mutual friend in Delaware and finally got to meet at a recent wedding. We clicked instantly, and just really enjoyed each other’s company. I’m excited to see what happens.

On Teen Mom 2, Marroquin and ex-wife Kailyn Lowry are working on their communication and trying to peacefully co-parent. 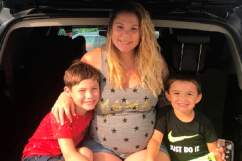