.@ParisJackson speaks on Nazis, white supremacist, and #Charlottesville at the #VMAs ! Speak on it !! pic.twitter.com/3LoQbYGcmo

Paris Jackson took the stage tonight as a presenter at the 2017 VMAs and it appeared that she went a bit off-script before she handed out the Best Pop Video Award to girl group Fifth Harmony. She urged viewers to take a stand together and make a difference in the world. She then called out all the “neo-nazi jerks and white supremacists” all over the world and she was met with cheering and applause.

Paris Jackson gets political at the #VMAs: "We must resist" https://t.co/mlTmdtNYJf pic.twitter.com/D7qN2eybAs

Jackson’s speech came after a somewhat awkward introduction to the show from host Katy Perry. Perry pretended to have been away from Earth in outer space and joked about the status of our country, along with the world as a whole. There was little participation from the crowd and celebrities who were shown on camera barely cracked smiles.

Jackson is sure to not be the only star to get political on stage tonight. 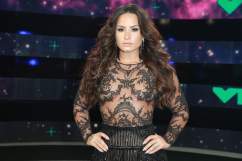 Read More
MTV, Paris Jackson, TV, VMAs
Paris Jackson used her presenting position at tonight's VMAs to call out all the "Neo-Nazi Jerks and White Supremacists" in the world.