Now that Rick and Morty Season 3 Episode 4 is premiering, fans are already getting excited about Episode 5. Here are some spoilers about what we know so far about the episode, including video and photos.

UPDATE: Wubba lubba dub dub! Looks like the original order of the episodes has changed or earlier guesses about what Episode 5 was going to be about were wrong. This next episode is now a Rick and Jerry adventure, rather than the one about the green clones as we originally thought. We’ve updated this story now with the new information.

Episode 5 is supposed to be called The Whirly Dirly Conspiracy. Earlier clips of Rick with Jerry were predicted to be from Rest and Ricklaxation, which is the title of Episode 6. It appears that those guesses were wrong, so here are all the clips and photos we have of Rick and Jerry together for Season 3.

The description for next week’s episode doesn’t really fit with a Rick and Jerry adventure either. It reads: “Beth fails as a mother; Summer has body issues.” That sounds like the episode where Summer turns into a giant. Maybe that’s the B storyline?

Rick and Jerry are seen together around :34 in the trailer.

Then we have this photo, which shows Rick and Jerry arriving at a destination together:

We saw a few scenes in the Season 3 trailer that showed Rick out having fun with Jerry, for some reason, so that seems the best guess for this episode. The photo above is from a clip played by Adult Swim here. It shows Rick and Jerry arriving at a place that Jerry says is fancy, but Rick says could be an alien truck stop for all Jerry knows.

But why would Rick ever choose to spend time with Jerry? In this photo, it looks like Rick’s been shot but he’s doing just fine:

But Jerry’s not having fun the whole time, so this might be why Rick is happy to spend time with him:

Then again, maybe it’s not even the same Rick after all. Check out the same mark on his shirt, looking like he’s been shot: 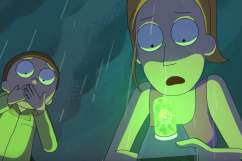 Read More
Adult Swim, Rick and Morty, TV
See photos and videos from next week's episode of Rick and Morty. These will give you some clues about what to expect next on "Whirly Dirly Conspiracy," 03x05.