Getty American vandal 2: Who is the turd burglar?

Is American Vandal a true story?

There are a couple of things you should know right out of the gate about American Vandal, the two-season original series on Netflix that has a lot of people talking (Some people are indeed wondering whether American Vandal is a true story.)

For one, the first season of the mockumentary series is about dicks (literally.) The second season features the same two high school documentarians and is about a turd burglar. For another, no, neither season is based on a real story, and neither is a real documentary. It’s a spoof. (Warning: Plot spoilers ahead.) Both seasons are, however, hilarious, as more and more people are discovering. (Season 2 was available for streaming through Netflix in September 2018).

It’s easy to see why the binge-worthy series is confusing some people into thinking it was based on a true story. The documentary style show is a tongue-in-cheek parody of the true-crime, defendant-focused, the system-is-rigged, maybe he was framed!, whodunit craze – think shows like Making a Murderer, Jinx, and Serial (the famous podcast is even mentioned by a character in American Vandal.) Those shows were based on real people, but American Vandal’s characters are actors. (It’s also a lewd high school comedy; one newspaper drew a comparison to American Pie.)

Sorry to disappoint you if you were one of those people who thought there really was a Hanover High, and Dylan Maxwell really was expelled (or you thought a turd burglar was making kids sick in Bellevue, Washington.) Someone didn’t really paint dicks on teachers’ cars at Hanover High. No one dumped laxatives in the lemonade, either. (If you want to get a cast of characters for season 2, and learn who the fictional turd burglar was, though, you can read here. Warning: There are spoilers.)

In fact, the show is so brilliant at skewering the tropes in the true crime docs that it’s going to be difficult to watch one of them again without thinking about big, red outlines of penises or frantically crapping students. That’s going to make things difficult for Making a Murderer 2. First comes tragedy, then comes farce (not sure how you go back to tragedy after that.)

#AmericanVandal on @netflix is one of the funniest damn shows on TV. Just dropped last week. I won’t…and can’t..tell you the plot. pic.twitter.com/zbyfNmbeSR

No real-life character could possibly match the villainy of season 1’s Mrs. Shapiro (and, no, she didn’t paint the dicks. She’s far worse than that.) Season 2’s Mrs. Wexler is pretty villainous too.

American Vandal borrows a lot from those shows’ style. Let’s talk about season one so you can see the origins of the documentarians’ trajectory. It’s ostensibly a documentary being filmed by two other high school students (who make up the “Morning Show 9” high school television broadcast). Thus, the show carries a real-life, documentary feel to it (sort of like the Blair Witch Project of crime parodies, with shades of Cold Justice and its whiteboards and suspect lists). Text messages and social media videos are spliced throughout the mockumentary, giving a behind-the-scenes, authentic air to the project that makes the viewer feel like he or she is watching scenes unfold in real time. Season 2 continues that pattern. It helps that the teachers in both seasons are archetypes we all recognize; who didn’t have a taking-the-job-too-seriously uptight vice principal like Mr. Keene? The gym teacher after the “hot moms,” the obnoxiously friendly Spanish teacher whose smile hides her malevolence, the physics teacher who confiscates cell phones for the whole semester, the over-sharing history teacher who tries too hard to fit in with the students: It’s all there.

The second season borrows a lot from the first, although it changes the venue to a private school; however, everyone, from the cop to the grandma of a key suspect, feels real (they’re actors). As with season 1, season 2 plays with the notion of false confessions. The series borrows from true-crime TV by having characters narrate what happened.

In season 1, there’s a hashtag #whodrewthedicks too, but that’s part of the satire. Season 2 continues the pattern of presenting fake social media posts as if they’re real to give the show a true vibe. “A high school is rocked by an act of vandalism, but the top suspect pleads innocence and finds an ally in a filmmaker. A satirical true crime mystery,” Netflix admits in the tease for season 1, giving away that the entire thing is fiction.

Dylan Maxwell, the central character whose innocence is in question after someone draws penises on teachers’ cars in season 1 (yes, that’s the plot), is played by actor Jimmy Tatro. Documentary filmmaker Sam Ecklund is played by actor Griffin Gluck, and Tyler Alvarez plays Peter Maldonado. The teachers are fake too. Mr. Kraz, the cool teacher-without-boundaries, is played by Ryan O’Flanagan. You can see the full cast list here. Season 2 continues the trend of a misfit suspect who is easy for the cops to manipulate, however earnestly.

In season 2, Kevin McClaine, the main suspect, is played by actor Travis Tope, who has had roles in movies and shows like Independence Day: Resurgence and Boardwalk Empire. Gluck and Maldonado reprise their roles. Yes, they’re all actors.

#AmericanVandal starts off like #MakingAMurderer but ends up being #TheBreakfastClub

Where have you seen Tatro before? His real-life story does share things in common with Dylan Maxwell’s. “Jimmy is an actor who started his career using YouTube, making sketches which were relevant to his college lifestyle at the University of Arizona in which he was part of the Pi Kappa Phi fraternity,” reports IMDB. “He and his friend Christian started the YouTube channel and series named ‘thejimmytatrochannel’ in 2011 which later switched to ‘LifeAccordingToJimmy.’ He writes, produces, directs and stars in each of his sketches.” Genius casting if you ask us. The channel has 2.7 million subscribers. You can see it here.

Here’s the kind of stuff the real Jimmy Tatro does:

American Vandal is clearly a play on Making a Murderer. Instead of Wisconsin outcast and junkyard family member Steven Avery, convicted of murder after being exonerated for a rape he didn’t commit, you’ve got Maxwell, an outcast high school student who is wrongly expelled for vandalism he didn’t commit, but who goes on to become what people wrongly thought he was. In season 2, you’ve got Kevin McClain, the outcast student who confesses to being the turd burglar at the series’ onset – but was he really?

This all had some people very confused.

Watching American Vandal and I still can't tell if it's a joke or not. This cannot be a real show. #AmericanVandal

I seen the adds for American Vandal but always thought it was a joke I just logged onto Netflix and can’t believe that it is actualy real?

Which of my friends watched 2 episodes of American Vandal, Netflix series about someone drawing dicks on cars,& didn't know it was a parody?

Making things even more confusing, some people thought the trailer for season 1 was a spoof and that there couldn’t possibly be a show on Netflix about someone painting dicks on a car. But there is. (If you’re offended by the word dicks, you haven’t watched the show. It’s impossible to write about American Vandal and not use the word dick.) And now poop…

I definitely thought the American Vandal trailer was a spoof. Had no idea it was a real thing going onto Netflix.

Tatro cleared that one up.

The entire first season of American Vandal drops this Friday on @netflix ! And yes, for the last time, it is absolutely a real show. pic.twitter.com/k0IXXlNZib

Yeah, it’s a real show. However, it’s not a real, real show. If you know what we mean.

As with Making a Murderer’s Avery, Maxwell’s reputation – and his lower intelligence threshold – made it easier for authorities to rush to judgment (instead of trial scenes, in American Vandal we are treated to school board meetings filled with close-minded authority figures who don’t want to investigate alternate suspects or even consider the possibility that someone else might have done it. After all, Dylan had drawn dicks on whiteboards before). However, Maxwell may have more in common with Brendan Dassey, Avery’s high school age nephew, who was convicted on the basis of what many see as manipulated videotaped confessions but no forensic evidence.

The real-life documentary filmmakers in Making a Murderer were granted unusual behind-the-scenes access to film the Avery and Dassey families during the court cases (one can’t help but think of Dassey’s mother, Barb, in the scenes with Maxwell’s mom).

Despite being a running dick joke and parody, American Vandal manages to raise tough questions about whether a person with a past and who lacks social capital can ever get a fair trial in the criminal justice system (or school justice system as it were). As one character aptly sums it up, “I’ve learned that suggesting guilt is a whole lot easier than proving innocence. It’s not difficult to make any member of the morning show 9 look like they could have done this. They all had the opportunity, and most had the motive. But our evidence against them is circumstantial.” Season 2 is similar. It plays with our preconceptions and shows you how easily it is for the human mind to disregard the possibility of counter evidence because someone just seems guilty (or is manipulated into confessing by authority figures). Both shows are about rushes to judgment.

In the end, season 1 points to a final suspect (it’s sort of a modern game of Netflix Clue: It was Shapiro in the library with the candlestick! It was Mack with the wrench in the study…), but then fails to definitively point the finger, lacking smoking-gun evidence (perhaps this was the final skewering of the shows that assume evidence framing without offering concrete proof while purporting to expose authorities who themselves leapt to judgment.) Season 2 also points to a final suspect, but there’s a twist, with the concept of collective guilt weighing in. Season 2’s ending has a Murder on the Orient Express feel to it.

Dylan Maxwell, perhaps then, bears the most in common with Steven Avery’s earlier case, in which he was convicted of a rape he didn’t commit but served years in prison for doing (he was released shortly before the murder); that earlier case also had a tight timeline that almost gives an alibi, allegedly biased adjudicators, the previous bad reputation and similar acts that lend credence to the theory, and a false eyewitness identification to boot. One can’t help think of Avery living in a fishing shanty after his initial exoneration as Maxwell’s post exoneration life starts to fall apart.

We won’t tell you who drew the dicks, though. You’ll have to watch the show to learn that (and, even then, you won’t be sure.)

As for season 2, who is the turd burglar? More details here: 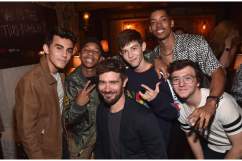 American Vandal 2: Who Is the Turd Burglar? [SPOILERS]