Ellie Kemper was once again nominated for an Emmy for her performance in Netflix’s Unbreakable Kimmy Schmidt. Kemper is married to Michael Koman, a television writer, and they have a son named James.

Koman is an Emmy-winning comedy writer, having working on Late Night With Conan O’Brien, MADtv and Nathan For You. In 2007, he was part of the Late Night team that won Outstanding Writing for a Variety, Music or Comedy Program. He was nominated for his work on the show six other times. His most recent nomination came in 2016 as a writer for Triumph’s Election Watch 2016.

Koman also worked on eight episodes of Saturday Night Live. He was the head writer on the short-lived Important Things with Demetri Martin and created The Jack And Triumph Show. He’s also a producer on Nathan For You.

Kemper and Koman announced their engagement in December 2011.

“My family likes him a lot. They’ve met him many times,” Kemper told O’Brien during an appearance on Conan. “My parents are very warm, welcoming people to begin with, but also, Michael’s a delight.”

The couple tied the knot in July 2012. Bridesmaids co-star Kristen Wiig and The Office co-star Mindy Kaling were reportedly at the wedding.

They are also the proud parents of James, who is now a year old. During an appearance on The Late Show With Stephen Colbert, Kemper said they are raising James Catholic even though Koman is Jewish. They even had James Baptized.

“Ever since becoming a mother, I thought that I would become more mature with this greater responsibility,” Kemper told Colbert. “But I go to bed at 7:30, and usually I’ve eaten dinner by 5.” 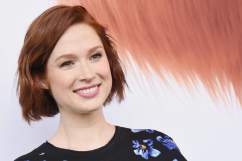