Narcos Season 3, now available for streaming on Netflix, doesn’t focus much on Pablo Escobar, and it introduces compelling new characters and narratives that appear ripped from the headlines. The most compelling character, in many people’s minds, is Jorge Salcedo, the head of security for the Cali Cartel.

That has a lot of people wondering: Is Salcedo real? The answer is yes, although some scenes were fictionalized.

The show starts each of its 10 episodes by showing a Time Magazine cover that features the four “Godfathers” of the Cali Cartel, a nod to its realism. They’re taking over the Colombian cocaine trade to the U.S., in the vacuum caused by Escobar’s downfall, but they’re soon riven by differences over whether to go “legitimate” (on the surface at least.) A DEA agent’s sense of justice – much to the frustration of the CIA – leads to dangerous paranoia and increasing violence within the cartel, as well as revelations about the extent of its political power.

However, the true soul of series 3 seems, in many respects, to be Salcedo, who maintains a sense of nobility and decency amidst the mayhem, the mirror, in a way, of Javier Pena’s DEA agent. Good people can sometimes do very bad things, as Salcedo admits when he tells his wife he is a good person before catching himself and telling her that he was one. He’s played by Matias Varela, a Swedish-born actor with Spanish heritage, who captures the character’s humanity through the eyes. He, along with Pena, gets the most screen time.

I'm so excited only one more week to go until #Narcos @narcos #NarcosSeason3 @netflix @netflixes @netflixnordic #netflix the cast is truly incredible so happy I got the chance to work with such talented actors directors producers ad's cinematographers it was like going to school. Love you all ❤

How historically accurate is Narcos Season 3? The show starts each episode with a disclaimer that, although it’s based on real events, there were some dramatic liberties taken.

Warning: There are some plot spoilers ahead.

The real Jorge Salcedo consulted on the show, and he spoke to EW about it. Although he didn’t actually do everything he’s shown doing in Narcos 3, Salcedo believes the portrayal is largely accurate. You can see a photo of the real Salcedo here. He’s really in the witness protection program, although his penchant for fast food and whether he worked as a car mechanic are details unknown. Thus, there are no recent photos of the real Salcedo.

You’ll have to do with Varela:

There’s a book on the real Salcedo by William Rempel.

Does the real Salcedo think Narcos Season 3 is accurate? He thinks it’s substantially true, but not specifically so in every case.

“The story in general remains the same [as the truth]. However, they present some happenings, and they put them so that it was me that made them. So he told me about one or two incidents that I may have known about or was around when it happened, but it wasn’t always me who was executing all those things,” he told EW.

He says that some of the most dramatic scenes in the show were real, though, or close to real. For example, asked about the scene where Miguel Rodriguez, a Cali Godfather, puts a plastic bag over the character’s head, the real Salcedo said: “Something very close happened to that. Because at that point, they were suspecting about me. They were having a meeting, and they were excluding me of everything.”

Other things didn’t happen the way the show said they did, though. For example, the real Salcedo says he never killed the hitman Navegante, and he did have conflict with Miguel Rodriguez’ son, but his name was William, not David. It was true that he was the son of a general who wanted to leave the cartel to start his own security firm. You can read more of the Salcedo interview with EW here.

CNN published an article in 2012 by the real Jorge Salcedo that was titled “What I saw inside the Cali drug cartel.”

He wrote, in part, “First, some background: I used to be Jorge Salcedo. I left my name in Colombia when I entered the U.S. witness protection program 16 years ago. I also left a home, a country, friends, family, even my past. But maybe my experience will help show the importance of fighting corruption as a way to fight the cartels.”

He ran security for Miguel Rodriguez Orejuela and “managed to deliver nearly a million dollars in payoffs. And I witnessed many, many millions more.” He added, “When I agreed to assist U.S. drug enforcement agents 16 years ago, the Cali cartel was making $7 billion a year. Cartel documents turned over to Colombian authorities exposed a vast network of corruption. There was public outrage. Widespread arrests and firings followed, and the grip of corruption was broken.”

“Aiding U.S. drug agents unexpectedly and at great risk was a senior cartel official, the head of security and intelligence for the syndicate. For years he had protected the bosses, their wives and children. Then, he crossed them,” The Times reported, quoting Salcedo as saying, “It was very risky, but I was trapped in a nightmare, in a totally corrupt environment. I had to escape.” As a result, he was marked for death by the cartel.

Described the Times: “The wonkish, soft-spoken family man was an unlikely drug gang recruit. He held university degrees in mechanical engineering and industrial economics. He started his career designing forklifts and other machinery. Later he ran an oil recovery business.”

The Rempel book blurb on Amazon reads in part, “Jorge rises to become head of security for Miguel Rodríguez Orejuela, principal godfather of the $7-billion-a-year Cali drug cartel. Jorge tries to turn a blind eye to the violence, corruption, and brutality that surround him, and he struggles privately to preserve his integrity even as he is drawn deeper into the web of cartel operations. Then comes an order from the godfathers that he can’t obey—but can’t refuse. Jorge realizes that his only way out is to bring down the biggest, richest crime syndicate of all time.”

There’s no question that Salcedo is the heart of the Narcos Season 3 series, along with Javier Pena as the DEA agent determined to find justice in a scenario without any real victories. They give viewers people to root for amidst the corruption.

Boyd Holbrook, who played character Steve Murphy, isn’t in season 3 for long. Both Murphy and Pablo Escobar do make appearances at the beginning of the story 3 series, but we will leave it at that so as not to spoil the plot (suffice it to say that Salcedo gets a lot more screen time.)

You can watch the Narcos Season 3 trailer here:

CNN gave a positive review to Season 3, saying it “splendidly hit the reset button, with Pedro Pascal moving to the center and a quartet of Cali Cartel kingpins filling the void. Boyd Holbrook’s character has moved on, leaving Pascal, as DEA agent Javier Pena, to take over the narration chores.”

The show is exclusively on Netflix, and it runs for 10 episodes. Learn more about what might be in store for the show in Narcos Season 4 here: 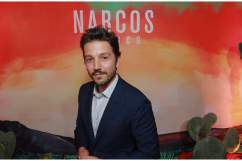