The new trailer for The Last Jedi dropped today during ESPN’s Monday Night Football and it was a good one. Be warned that this trailer was likely to contain spoilers from the upcoming movie and this post will discuss said spoilers. You have been warned.

After Kylo Ren’s stunning decision to kill his father, Han Solo, it looks like Ren might be down the similar path of killing a parent again in The Last Jedi. In Carrie Fisher’s brief stint in the trailer, we see her about a command ship of sorts and what looks to be Kylo Ren deciding whether or not he should blow it up. We all know Kylo Ren can be conflicted as we saw in The Force Awakens and it’s looking like he will be following a similar pattern here. We know Carrie Fisher finished her filming before she passed away so this might end up being a way to write her out of future movies.

Interestingly enough, it looks like Rey is conflicted too as we see her near the end of the trailer joining, or at least it sure looks like she is, Kylo Ren. Of course this is just a trailer and things may have been chopped and edited in certain ways to make us think something entirely different. For example, it’s possible Kylo Ren isn’t actually reaching out to Rey at the end but he could possibly be reaching out to Luke.

Luke delivering the line, “I’ve seen this raw strength only once before. It didn’t scare me enough then. It does now,” gives us chills and we’re pretty interested with what he’s talking about.

What we can say for certain is we’re excited with where this movie is going. After feeling a tad too nostalgic to A New Hope, The Last Jedi takes things up a level and goes where Star Wars hasn’t gone before. For right now, it’s hard to trust what we saw in the trailer because it doesn’t seem to make a whole lot of sense to give away major plot points in a theatrical trailer. With that said, Kylo Ren killing General Leia could definitely be something we see.

The Last Jedi opens in theaters December 15 and tickets are on sale now. Then we’ll be able to come back to this post and see how much of this trailer was just straight up misdirection by the filmmakers. 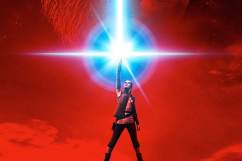 ‘Star Wars: The Last Jedi’ Ticket Sale Date: Where Can You Buy Tickets?