Dancing With the Stars enters part 1 of its finale for season 25 and four contestants are left in the competition. This means that casting your votes is extremely important to keep your favorite contenders in the game so that they have a chance to take home that mirrorball trophy. Tonight’s live episode airs at 8 p.m. ET, with a time-delayed broadcast at 8 p.m. PT on the ABC network, as usual. For tonight’s show, the pairs will put on two performances each and will execute a paso doblé, foxtrot, Charleston or quickstep for the first dance, which is a re-do of a previous routine. The second dance will be the long-awaited free-style, which means there are no rules. The official ABC description of tonight’s show reads, “Julianne Hough returns as a guest judge, and the four finalists will each perform two dances: a Redemption Style dance (paso doblé, foxtrot, Charleston or quickstep), and a Freestyle dance – one of the biggest competitive dances of the season. In addition, the night will include special performances by Pitbull & Fifth Harmony singing their latest single, “Por Favor,” and Alexander Jean performing “Wouldn’t Change Anything,” featuring a dance by Julianne Hough.”

According to the official ABC synopsis, this is the rundown of the performances and what to expect: Drew Scott and Emma Slater will dance a Paso Doblé to “Get Ready” by Rayelle for their redemption dance and they will perform their freestyle routine to “The Ding-Dong Daddy of the D-Car Line” by Cherry Poppin’ Daddies. Frankie Muniz and Witney Carson’s redemption dance will be a Foxtrot to “I Won’t Dance” by Frank Sinatra, while their freestyle will be to “Run Boy Run” by Woodkid. Jordan Fisher and Lindsay Arnold’s redemption performance will be a Charleston to “Bad Man” by Pitbull featuring Robin Thicke, Joe Perry and Travis Barker. Their freestyle performance will then be executed with the song “Puttin’ on the Ritz 2017 (Jazzy Radio Mix)” by Taco featuring tomX. Lindsey Stirling and Mark Ballas will perform their redemption routine as a Quickstep to “Barflies at the Beach” by Royal Crown Revue. Their freestyle dance will be to a medley of ”Remember the Name” by Fort Minor featuring Styles of Beyond and “Palladio” by Escala.

For the finals tonight, viewers can cast their votes for contestants and/or couples via phone during and up to 60 minutes after the end of the Dancing with the Stars broadcast in each time zone. Online voting is available at ABC.com via http://dwtsvote.abc.go.com/ and on Facebook at http://bit.ly/2o1VO7b. The online voting is open for 24 hours, starting from the very beginning of each episode on the East Coast at 8 p.m. ET/5 p.m. PT and closing at 8 p.m. EDT/5 p.m. PT on Tuesday nights. For those who want to cast their votes over the phone, these are the phone numbers, in alphabetical order, for the remaining contestants: Drew Scott – 1-800-868-3404; Frankie Muniz – 1-800-868-3405; Jordan Fisher – 1-800-868-3406; and Lindsey Stirling – 1-800-868-3407. When it comes to the number of times viewers can cast their votes, the number of votes you can submit per each voting method is equal to the number of couples still in the competition. Currently, there are 4 contestants still in the mix. So, with four couples remaining, there is a limit of five votes per voting method, as per the rules. You must be 18 years old to vote and, if you wish to vote via Facebook, you must be located in the United States or Canada and have a Facebook account. Don’t forget to cast your votes for your favorite celebrity competitors and their pros or they may be not be this season’s winner. As for tonight’s upcoming elimination, the votes are already in and have been factored into the results, which will air live. According to ABC, “At the end of the night, one couple will be eliminated. The remaining three couples will have one last night of competitive dancing, vying to score some extra judges’ points. Additionally, viewers can participate in an online-only vote for the remaining couples, where, at the end of the night, one of them will be crowned the Dancing with the Stars champion, culminating an incredible season, which will be announced live from The Grove.” 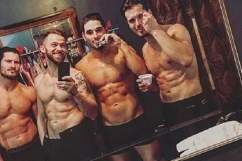