On Thursday, photos of a woman bearing an eerie, and undeniably alarming, resemblance to Angelina Jolie began circulating on the Internet.

Within hours, social media users deduced that the photos were of an Iranian teenager named Sahar Tabar, who has has reportedly undergone a number of plastic surgeries in an attempt to look more like her idol, Angelina Jolie.

Tabar has become an instant viral sensation, with some people doubting whether the look has been achieved by surgery or prosthetics, and others simply expressing their disgust with the extreme transformation.

Here’s what we about Sahar Tabar:

1. She Has Reportedly Lost 88 Pounds and Undergone 50 Plastic Surgeries to Look Like Angelina Jolie

Although it has not been confirmed that Tabar’s look is the result of plastic surgery, there has been a troubling increase in the incidence of teens who desire, and have undergone, these kinds of procedures, in general.

In 2014, The Guardian published a report about young adults and plastic surgery. The article referenced a magazine survey that questioned 2,000 teenagers and found that 40% of girls had considered plastic surgery. Only 8% of those who took the survey said they were happy with their bodies.  The piece also quoted psychotherapist, Andrea Scherzer, who specializes in eating disorders and body image disturbances, as saying, “Teenage girls are acutely aware of and influenced by the lengths adult women are prepared to risk their physical health in pursuit of a ‘perfect’ body. And every year the pressure to be perfect increases.”

2. Some Have Speculated Tabar Is Using Prosthetics and Hasn’t Had Any Surgery

sahar tabar is the greatest visual performance artist of all time cuz she really got yall thinking shes an actual zombie pic.twitter.com/oa1jzw60LO

According to The Daily Mail, Tabar says she is one of Jolie’s biggest fans.

Some people are calling her bluff, saying she has used prosthetics to achieve the extreme look. A number of people have pointed out that Tabar’s lips appear to be a different size in different photos, suggesting prosthetics are involved.

Others claim the photos have been photoshopped.

According to the website Snopes, an additional Instagram in Tabar’s name, which has since been deleted, refuted allegations that the teenager had 50 surgeries. Snopes reports a comment on that account as reading, “Hello relatively dear followers, the picture that you’re scrutinizing, even though I didn’t like it, I kept it in … I must say I only had [indeterminate number of] surgery, not 50 surgeries, and foreign sites and channels were very biased in the way they talked about my photos. I thought these people are probably living in the 18th century and they haven’t seen or heard of technology or makeup and they are really surprised.”

3. Her Instagram Following Rose by over 60K on Thursday

It’s unclear if fame was her intention or not, but Tabar has nonetheless become an instant viral sensation.

On Thursday afternoon, she had 365K Instagram followers. By the early evening, she had amassed over 434K followers. Nearly every photo is a selfie showing the Iranian teen’s attempt to emulate her idol with pointed cheekbones and pouty lips.

The teenager’s viral transformation comes just one month after news broke that a 42-year-old Texas woman, Claudia Sierra, underwent nine plastic surgeries to look like Melania Trump. In an interview with Inside Edition, Claudia Sierra said, “Melania Trump is the most beautiful woman. She’s perfect to me.” Sierra’s operations included an eye lift, fat grafts, rhinoplasty, breast implants, a tummy tuck, and liposuction, according to Cosmopolitan.

Meet Sahar Tabar dubbed the Angelina Jolie of Iran. She has undergone 50 surgeries to try and look like her idol, has she succeeded? pic.twitter.com/pV3uFnUtU6

Sahar has removed all her ‘before’ photos on Instagram.

The first Instagram on her current page was uploaded is dated March 23.

An “Artists” page has also been created for Tabar on Facebook. As of Thursday evening, the page had over 450 followers– it started the day with under 100.

Though Sahar doesn’t appear to have a Twitter herself, she has certainly caught the attention of the Twittersphere.

A number of users have posted ‘before’ pictures to the social media service, commenting on Sahar’s drastically-changed appearance. On Thursday, one Twitter user uploaded as screenshot of a news article about Sahar, and commented, “#sahartabar before and after her surgeries!!!! In a futile attempt to look like #AJo !! This is really sad. And raises qs on this over emphasis on looks and the body!?”

Another wrote, “I know I’m not the best example for self love but please try to love yourself and stop comparing yourself to celebrities. I don’t get it why people try to look exactly like someone else. Copying her character would’ve been better.” 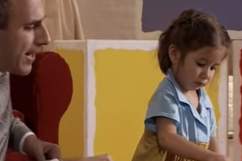