A post shared by Elizabeth Potthast Castravet (@elizabethpotthast) on Dec 6, 2017 at 5:32pm PST

Elizabeth Potthast and Andrei Castravet are one of the couples on 90 Day Fiance this season. Potthast’s friends and relatives have their doubts about the relationship, especially when Potthast says her man likes his woman to be a bit more conservative. The couple met on a social app and Elizabeth Potthast is a 27-year-old from Tampa, Florida while Andrei Castravet is a 31-year-old from Chisinau, Moldova. Potthast actually works in the entertainment field as a talent scout and actress.

According to Reality Blurb, Potthast actually appeared as a cashier on the show Homeland in 2011. Potthast even has her own IMDb page. She also appeared in a film from 2012 called Secrets in the Snow. Starcasm, reports that the plot of Secrets in the Snow reads, “For the students of Eastbrook High, what began as a December snow fall quickly becomes a threatening winter storm, and school is dismissed for the day. Six familiar strangers are the only students remaining at school as the conditions outside worsen and the doors to the school are locked. The lurking danger and personal conflicts are intermixed with the excitement of endless possibilities of having the entire school to themselves. An impromptu talent show and culinary class feast ensue, and a frozen knock from outside the school brings a whole element to the evening! Wills are tested, friendships are created, and secrets are revealed as they realize they must rely on each other to make it through the stormy night.” In addition to acting, according to a Zillow profile, Potthast is in property management and is a landlord. She has three properties listed under her name on the site.

A post shared by Elizabeth Potthast Castravet (@elizabethpotthast) on Nov 30, 2017 at 8:30pm PST

So, how is Potthast doing today with Castravet? According to a marriage license posted by Reality Blurb, the couple married on October 5, 2017 at a courthouse in Tampa, Florida. The couple first became engaged in Sicily, Italy in August of 2016.

Other couples on the show this season include Nicole with Azan, Evelyn and David, Molly with Luis, and Josh with Aika. Nicole and Azan are familiar faces on the series, but now Nicole has brought her young daughter named May with her to meet Azan. She hopes to bring Azan to America and would like to see him be a father figure for her daughter. It appears that the couple are still together today. Evelyn and David have also tied the knot. Evelyn was only 18 years old when they were engaged, which made her friends and family uneasy. Molly and Luis have also gotten married, as reported by Starcasm. And, so have Josh and Aika, as of September 2017. 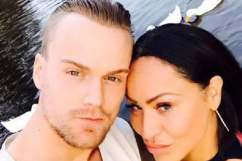 Darcey Silva & Jesse Meester, ’90 Day Fiance’: Are They Still Together?