Jax Taylor of Vanderpump Rules fame is mourning the loss of his dad, Ronald Cauchi. Earlier this year, Taylor revealed that his dad had been diagnosed with Stage IV esophageal cancer sometime in October. According to the Mayo Clinic, “esophageal cancer is the sixth most common cause of cancer deaths worldwide.”

It is unclear what exactly causes esophageal cancer, but smoking and alcohol are considered risk factors. It is unknown if Taylor’s dad had been a smoker or a drinker in the years leading up to his diagnosis.

Taylor has talked about his dad’s cancer battle from time to time in recent interviews and had gotten to spend a bit of time with his family over the Thanksgiving holiday. Taylor brought his girlfriend, Brittany Cartwright, to Tampa, Florida, to spend time with his parents, who live in Tarpon Springs (about 30 miles outside of the city). During that visit, Taylor and Cartwright took in a hockey game at Amalie Arena, watching the Tampa Bay Lightning — a favorite pastime shared between Taylor and his dad.

“It’s rough, because my dad, he’s like my idol. My dad was always the person who never got sick, I always looked up to him. … It’s hurt our family. It’s hurt everybody. It just really sucks. During the holidays, it doesn’t make it any easier,” Taylor told Bravo’s The Daily Dish on December 11.

His dad was just 61 years old.

Below is Taylor’s Instagram message that he posted on Friday, December 29.

“Where do I begin… I lost the best man I knew yesterday, he was my best friend. I didn’t go a day with out texting him a pointless question that usually drove him nuts, but I know he loved it. My dad loved his family more than anything in the world he was the “perfect father” and wanted everyone to get along and be happy. Cancer took my dad way too soon but I have to hope and pray that god has a bigger plan for him. The two things other than his family he loved more than anything were Detroit redwings hockey and cars.. He was a simple man that didn’t speak much but when he did you listened. I’ll never forget the 5am hockey practices to Windsor Canada on the weekends, the numerous hockey tournaments, and the little talks we had if I had a bad game. He was always there for every practice and every game. When I came to Florida to visit it was like seeing my best friend all the time, our countless fishing trips and pub crawls going to hockey games in Tampa. “ drove him crazy cuz Tampa would always beat Detroit” yes my parents lived in Tampa but Detroit Michigan is my fathers home. My father never said one word that was negative, he helped so many people young and old…. I could go on and on. I love you dad, you are the best thing that has ever happened to me, I am so proud to be your son. Don’t worry I’ll walk jenny down the isle this summer but we are gonna need your help from above bud. Last thing.. thank you dad, thank you for giving me everything I needed in life with out a question. I hope one day I can be half the father you are. Love you so much dad… also thank you to my amazing “rock” my girlfriend Brittany, I couldn’t and can’t do any of this with out you. My father loved you so much as well, thank you for being who you are and for helping me deal with all this, you are my angel and you always will be.”

Ronald Cauchi is survived by his wife, Marie, and their two children, Jason “Jax,” 38, and Jenny, 33. 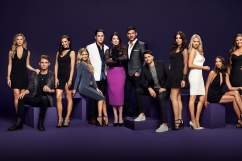