Jacqueline Trumbull is one of the contestants on The Bachelor 2018 and we have all the details on what to expect from Trumbull on the show. But, before we get into all the spoilers, this is your warning. DO NOT CONTINUE READING IF YOU DO NOT WANT TO KNOW TRUMBULL’S FATE ON THE SHOW OR ANY OTHER BACHELOR SPOILERS.

With that said, let’s get into tonight’s episode. Trumbull gets a one-on-one date tonight and ABC’s official plot description reads, “On the final day in the City of Light, Arie takes Jacqueline on a wonderful shopping date where she models the latest Parisian fashions and then they dine at the iconic Maxim’s. However, Jacqueline shares her future plans, which might cause Arie to re-think whether he will offer his date a rose.” According to Reality Steve, Trumbull ends up getting the date rose, but she eliminates herself soon after. Reality Steve reported that when the women head to Tuscany, “She eliminated herself … because apparently she felt it wasn’t a good fit anymore and things weren’t progressing.” Whether Steve has this date mixed up with tonight’s or not, Trumbull doesn’t have much longer on the show.

On January 13, 2018, Trumbull was actually in Hawaii when the false missile alarm went off. She tweeted that, “First day in #Hawaii and we get an iPhone alert about a ballistic missile. Nothing in the news but apparently a false alarm.” According to the Washington Post, an employee at the Hawaii Emergency Management Agency made a major error, sending cell phone users this message: “BALLISTIC MISSILE THREAT INBOUND TO HAWAII. SEEK IMMEDIATE SHELTER. THIS IS NOT A DRILL.” And across television screens, it read, “If you are indoors, stay indoors. If you are outdoors, seek immediate shelter in a building. Remain indoors well away from windows. If you are driving, pull safely to the side of the road and seek shelter in a building or lay on the floor.” Fortunately, it was a false alarm, but it sent people into a panic.

On a lighter note, though Trumbull doesn’t make it to the final four on The Bachelor, she has made a good friend with one of the other contestants, Kendall Long. In an Instagram post, Trumbull wrote, “Some of you have commented on my lack of airtime. The reason for this is that at this point in the process, I was in love with someone else. Kendall and I cuddled on the couch, cheers’d pee canisters, discussed the philosophy of magic and traded zoology facts with poetry. It is my dying wish to end up pickled in a jar next to Mugatu and Ping. I love you @keykendall88!!” Well, at least Trumbull found love on The Bachelor … it just wasn’t with star Arie Luyendyk.

Kendall Long is not the winner this season, though she does make it through the hometown dates. So, she is ready and available for her new bestie Trumbull if she’s game. 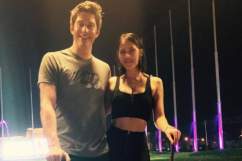