The Ritual is one of the newest original installments on Netflix. The movie released on February 9 with mostly favorable reviews. The ending may seem straightforward, but there’s still room for analysis.

The film is a Blair Witch-like horror film, following a group of friends into the woods, were spooky incidents start taking place. The group of college friends that the narrative follows are spending time together after the death of a loved college friend. The 4 men set out on a hike through the Scandinavian wilderness in order to honor their friend; however, all goes wrong when they take a shortcut through the woods. An ancient Norse evil exists in those woods, and it stalks them at every turn.

The Ritual was directed by David Bruckner and written by Joe Barton. It stars Rafe Spall as Luke, Arsher Ali as Phil, Robert James-Collier as Hutch, Sam Troughton as Dom and Paul Reid as Robert.

If you have yet to see The Ritual, you can watch the film on Netflix here.

Warning: Spoilers for The Ritual are found below.

By the time the film is nearing its end, the entourage of the 4 men have been reduced to just one. Luke (Rafe Spall) is shackled and dealing with the guilt of the cowardice he’d displayed so far in the forest. His own cowardice may have led to the death of his friend Rob earlier in the film. He breaks his own thumbs to get free from his shackles, and he lights the room of mummified corpses on fire.

Luke flees the monster as it chases him, eventually catching him and trying to force him onto his knees to worship him. This leads to the final fight scene. Luke confronts the Norse monster one-on-one, using just his axe for his weapon. Fighting the monster, Luke is able to retreat to the edge of the tree line, where he knows the monster cannot follow. He’s able to pass through the edge of the woods and then head back to civilization.

The fight with Luke is one of the only times when we get to see the monster in full light. The monster is a bastard god-spawn of Loki, a god in Norse mythology. Loki’s ways sometimes lead him to help others, while sometimes choosing to go against others maliciously. His son, the monster, can smell fear; it uses this to manipulate people into worshipping it.

The Ritual’s director told Metro.us that the ending works on a few different metaphorical levels. Luke is confronting his mental anguish about his own involvement in the death of his friend Rob. He’s also physically fighting off the creature.

We thought that required and deserved a bit of spectacle. There’s something about it, I mean, it’s Norse. It’s a tale of modern men walking into a Norse Viking nightmare, so they’re having to contend with things their ancestors contended with and mythologies that were sculpted to sort of reflect their internal dilemmas. 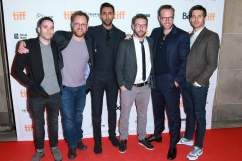 ‘The Ritual’: Meet the Cast of Netflix’s New Movie