Mark Healy was the dummy on Roseanne and he was played by actor Glenn Quinn throughout the series. He started out as the rebel boyfriend of Roseanne Conner’s daughter Becky. Mark went on to marry Becky, who was just 16 years old at the time. Mark became a staple on the show and the family just loved to make fun of him.

With the show returning as a reboot, almost all of the original cast has returned, with a few new additions as well. Unfortunately, the character Mark Healy has died and the show will pay tribute to the character. Mark’s brother David married Roseanne’s daughter Darlene on the show and they went on to have two children – Harris Healy and Mark Healy. In tribute to the late Uncle Mark, Darlene and David named their son after him. Little Mark Healy is played by actor Ames McNamara and his character is the opposite of what his late uncle was on the show. On the original show, Mark was an ignorant and chauvinistic guy, who always made fun of younger brother David, challenging his manhood. Now, his nephew, who is named after him, is a boy who enjoys wearing dresses.

So, why did the show do away with character Mark Healy? Unfortunately, the actor who played him, Glenn Quinn, died at the age of 32 on December 3, 2002. The cause of death was an accidental heroin overdose, according to Cinema Blend. Quinn was found on his couch by his friend in North Hollywood, California.

After Roseanne ended in 1997, the Irish actor went on to appear as the character Doyle on the show Angel, opposite David Boreanaz and Charisma Carpenter. His last role before his death was for the film R.S.V.P. in 2002. 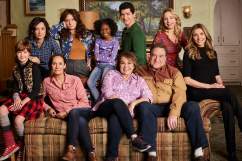