Peta Murgatroyd is sitting out this season of Dancing With the Stars. The pro dancer and her husband, Maks Chmerkovskiy, are currently on tour with Maks’ brother, Val, and all three will be traveling instead of competing in the ballroom.

Murgatroyd and the Chmerkovskiys have been dancing on various stages all over the country. The Confidential Tour wraps on May 16 in Las Vegas.

“The greatest performances come from artists with deep emotional connections to their work.  Confidential provides the deepest connection possible, with the cast able to draw upon their own family bonds, lives and love stories.  Confidential will be their most honest show yet, revealing secrets, hopes and dreams.  The show will inspire and delight, and by learning a little more about Maks, Val and Peta you might learn a little bit more about yourselves,” reads a description of the tour.

While the three won’t be going after a Mirror Ball Trophy, they will be cheering on their friends and the new cast. As for who Murgatroyd and the Chmerkovskiy brothers are rooting for, Jenna Johnson and Adam Rippon, all the way! Val Chmerkovskiy and has been dating Johnson for more than a year now, so the choice isn’t super surprising. He took to Instagram to wish his lady love and Rippon, an Olympic figure skater, luck.

“I think she has a great chance of winning. Now it’s only a matter of doing what Jenna Johnson is capable of doing and has been doing behind the scenes. She has been creative and incredible with her work ethic. People are going to get to see it now, because she has the partner that will allow her to put that up on a bigger platform. I don’t think she was given that chance in her first time as a pro. I’m very happy for her now,” Maks told People Magazine before Monday night’s Dancing With the Stars premiere.

“We’re definitely rooting for everyone, especially Jenna. I think she should definitely be one of the ones in the end,” Murgatroyd added.

During Saturday night’s show in Grand Prairie, Texas,  Murgatroyd was unable to perform, as she was ill. She posted an update on her health on her Instagram account and apologized to show-goers who had purchased tickets to see her perform.

“I need to apologize to the people who attended our Grand Prairie, Texas show. I have never missed a show due to illness in my entire dancing career. I woke up feeling a little nauseous, but I was able to go about my day with Shai. In the afternoon, the vomiting (and the you know what) started. I thought it was food poisoning. I had a fever and chills and just tried to sleep it off before the show. However, 8 p.m. rolled around and I could hardly walk and I couldn’t feel my arms or legs. I had no idea how I was going to walk out that door. The opening music starts and I walked out onto [the] stage. I tried my best to dance but my legs were giving out. Apart from it being very embarrassing, it was very scary,” Murgatroyd wrote in an Instagram post.

She did say that she was feeling better on Sunday and she was able to dance in Kansas City. She, Maks, and Val have the night off tonight (it’s possible that they will attend the Dancing With the Stars premiere), but are set to take the stage in Colorado on Tuesday. 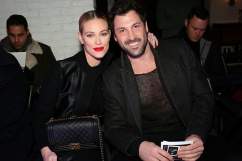