Witney Carson is set to kick off the new season of Dancing with the Stars with her athlete partner and Olympic medalist, Chris Mazdzer.

Carson was born in 1993. Her parents, Jill Johnson-Carson and Tyler Carson, raised her and her three younger siblings, Cade, Jaxon, and Camry, in American Fork, Utah. Ca  rson is married to her high school sweetheart, Carson McAllister. The couple does not have any children together.

Carson has had the constant support of her family as she pursues her career in dance, from her days starting out on So You Think You Can Dance to her eight seasons as a pro on Dancing With the Stars.

1. She Married Carson McAllister in 2016

date night with my ?

Witney Carson and her husband, Carson McAllister, met in high school. After graduation, McAllister went to Romania on a mission with the Church of Jesus Christ of Latter-day Saints. During that time, Carson tried out for So You Think You Can Dance. The couple corresponded with one another via mail, and went on their first official date when McAllister returned to the U.S.

In 2015, McAllister got down on one knee and proposed to Carson. She made the official announcement on Instagram.

“My love of four years @carson.mcallister proposed last night & I feel like the luckiest, happiest woman in the world. It was perfect, he’s perfect #engaged,” she wrote on Instagram in October of that year.

The couple tied the knot on New Year’s Day — three months after getting engaged — near Salt Lake City, Utah. According to People Magazine, Carson wore a Rivini gown to the “small religious ceremony” that was followed by a reception at NOAH’s Event Center.

We couldn't be happier with our experience at NOAH'S! If you are planning a wedding you really should check out @noahseventvenue! They are amazing and have locations all across the country! #NOAHSEventVenue #NOAHSWeddings #McAllisterWedding2016 #WitneyCarson #weddingvenue @noahseventvenue Flowers by @lfloralstudio

McAllister and Cason do want to start a family, but they aren’t quite sure on the timing.

“We don’t know, but we just kind of have to play it by ear because everything’s so crazy right now. It’s like we’re not really settled at all. But we do want kids,” Carson told People Magazine in February.

As far as how many children they’d like to have, Carson says “three or four.”

2. Her Father-in-Law Died From Pancreatic Cancer in March

The amount of love has made my heart burst with gratitude and humility. Thank you so much for reaching out in this heartbreaking time, it means so much! Some of you have asked how to help… I don't want to tell our sob story as we all feel very blessed- so if you'd like to help & show love to Cheryl, Kevin's wife and Kevin, I've made a gofundme if you'd like to donate.. link is in my bio ❤️ thank you again for outpouring love and prayers for our family.

In December of last year, Carson announced that her father-in-law, Kevin McAllister, had been battling pancreatic cancer. She took to Instagram to discuss his diagnosis and to give fans an update on his condition.

“My sweet father-in-law has been dealing with pancreatic cancer for the last year and a half. A few days ago he was having stomach issues & was unable to keep anything down. His doctors decided to do an exploratory surgery to find the problem, which we thought was just a minor issue. Unfortunately, we were completely wrong. The cancer has spread throughout his entire abdomen. We are so blindsided and still in shock… The doctors have explained there is nothing that they can do and have told us that we only have a few weeks with him before the cancer takes his life. After much heartache and discussion, Kevin has decided to fight it and try another aggressive chemotherapy treatment,” Carson wrote.

She went on to let her fans know that she would not be able to go on tour with Dancing With The Stars between seasons, as she wanted to spend as much time with her family as possible.

“After two long years of battling, & fighting tremendously… our sweet Kevin passed away last night. Although it will be excruciatingly painful at times to live without him, we know he lives on around us being our guardian angel wherever we go. We’re so grateful for the time we’ve had with him on this earth, & we know he’s in a better place,” she wrote.

3. Both of Her Parents Had Melanoma & She Was Also Diagnosed

Both of Carson’s parents were diagnosed with melanoma, and before she got too deep in her career, she too received the frightening diagnosis. She found a mole on her left foot, which turned out to be cancer.

“I have a family history of skin cancer. My dad and my mom both had melanoma, so they’ve always been on top of getting us checked often. We would go in for checkups every year,” she told AOL News. She underwent surgery to remove the mole and the surrounding tissue. Carson was determined to keep dancing, however, and worked hard to make sure that she could do just that.

“Every night after the show, I would actually go to my doctor and he’d come in after hours and wrap my foot, clean out all the scar tissue and put it back together,” Carson explained.

Carson’s mom, Jill Johnson-Carson, worked in the travel industry for several years and, according to her Facebook page, she’s still working as a travel agent in some form. She has been promoting cruise deals and offering her friends travel services in recent months.

Her dad, Tyler Carson, attended Utah State University and works for a software company called Altiris, based in Utah, according to his Facebook page. In his spare time, Tyler enjoys horseback riding and playing golf.

Witney Carson has three younger siblings to whom she is extremely close. She and her siblings were raised Mormon.

Her younger sister, Camry, is still in high school. She turned 14 in January. Her brother, Cade, is a junior in high school. Cade recently attended his prom. When he’s not at school, he plays basketball and golf. Both Camry’s birthday and Cade’s prom were celebrated by the Carson family, and their parents shared pictures of both occasions on social media.

In 2015, Carson’s brother, Jaxon, went on a mission to Belgium with the Church of Jesus Christ of Latter-day Saints. According to his blog bio, Jaxon loves sports, especially “basketball, golf, ping pong, wake boarding, and volleyball,” and was on his high school’s golf team. The blog was used to post updates from Jaxon’s mission trip. It hasn’t been updated in three years.

5. She May Have Gotten Her Dance Moves From Her Dad

This is my dad. He's the coolest. @scoob45 #HappyFathersDay ?

Back in 2014, Carson shared the above video of her dad, in honor of Father’s Day. The video was a compilation of her dad dancing — and fans were quick to point out that Carson must have gotten her moves from her dad.

The post ended up being super popular, and comments about how young (and good looking) her dad is were plentiful.

“Yo! Yo daddy still got it. He’s hot,” wrote one social media user.

“He is pretty awesome I have to say,” wrote another.

Carson isn’t shy about sharing photos of her family members and always stresses that her family is the most important thing in her life.

“At the end of the day, family is most important,” Carson told People Magazine back in February. 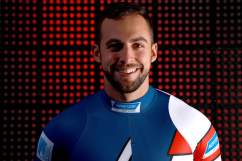