Memorial Day is a federal holiday in the United States, focusing on those who have died while serving in the armed forces. It is a time to remember our fallen soldiers. Over the years, many of our nation’s presidents have spoken to the public about the importance of those who has given their lives for their country, but it’s also important to remember the families who have lost their loved ones as well. In honor of Memorial Day 2018, read on for patriotic quotes from presidents below.

“Our nation owes a debt to its fallen heroes that we can never fully repay, but we can honor their sacrifice.” — President Barack Obama

In 2011, The White House Office of the Press Secretary published Obama’s remarks from a Memorial Day service and the above quote was included. Obama also opened the service with his own personal thoughts, stating, “To those of you who mourn the loss of a loved one today, my heart goes out to you. I love my daughters more than anything in the world, and I cannot imagine losing them. I can’t imagine losing a sister or brother or parent at war. The grief so many of you carry in your hearts is a grief I cannot fully know … This day is about you, and the fallen heroes that you loved. And it’s a day that has meaning for all Americans, including me.”

This is easily one of JFK’s most iconic and remembered quotes. It is from Kennedy’s inaugural address, when he got sworn in as the 35th President of the United States, in 1961. Poet Robert Frost actually participated in the inauguration.

“Heroism is not only in the man, but in the occasion.” — President Calvin Coolidge

The American Presidency Project reported that Coolidge included this quote in an address he gave in 1928. The address was to dedicate a memorial to Col. William Colvill, of Minnesota. Coolidge was a Republican lawyer, who became the 30th President of the United States. He was in office for 6 years and was succeeded by Herbert Hoover. Coolidge was actually the Vice President for Warren G. Harding, but he was upgraded to President, with the sudden death of Harding, who was on a speaking tour at the time. According to History, Harding died of heart failure. In 1933, Coolidge passed away from a blood clot in the heart.

“For love of country they accepted death, and thus resolved all doubts, and made immortal their patriotism and their virtue.” — President James A. Garfield

The 20th President, Garfield, spoke the above quote at Arlington Cemetery on May 30, 1868, according to Research History. In his speech that day, Garfield also stated, “I am oppressed with a sense of the impropriety of uttering words on this occasion. If silence is ever golden, it must be here, beside the graves of fifteen thousand men, whose lives were more significant than speech, and whose death was a poem, the music of which can never be sung. With words we make promises, plight faith, praise virtue. Promises may not be kept, plighted faith may be broken, and vaunted virtue be only the cunning mask of vice. We do not know one promise these men made, one pledge they gave, one word they spoke: but we do know they summed up and perfected, by one supreme act, the highest virtues of men and citizens.” 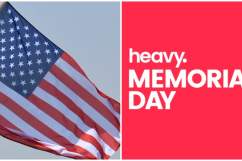 According to the Theodore Roosevelt Center, there is no exact reference attributed to this quote, though it is credited to President Roosevelt. Roosevelt was the 26th President of the United States and served two consecutive terms in office. Some may recognize Roosevelt’s face carved out on Mount Rushmore, along with presidents including George Washington, Thomas Jefferson, and Abraham Lincoln.

“Each of the patriots whom we remember on this day was first a beloved son or daughter, a brother or sister, or a spouse, friend, and neighbor.” — George H. W. Bush

Bush served as the 43rd Vice President of the United States, from 1981 until 1989 and he is also the father of former President George W. Bush. Recently, Bush lost his longtime wife, former First Lady Barbara Bush. During his presidency, Bush shared many great, patriotic quotes with the American people. Another one includes, “There is no higher honor than to serve free men and women, no greater privilege than to labor in government beneath the Great Seal of the United States and the American flag.” He also said, “To all who mourn a son, a brother, a husband, a father, a friend — I can only offer you the gratitude of a nation, for your loved one served his country with distinction and honor.”

“The cost of freedom is always high, but Americans have always paid it. And one path we shall never choose, and that is the path of surrender, or submission.” – John F. Kennedy

In 1962, John F. Kennedy addressed the nation to announce the blockade of Cuba to stop delivery of Soviet missiles, according to Voices of Freedom. The above quote was included in this speech. JFK also stated in this speech that, “We are a peaceful people who desire to live in peace with all other peoples … I speak to you as a friend, as one who knows of your deep attachment to your fatherland, as one who shares your aspirations for liberty and justice for all.”

“Guard against the impostures of pretended patriotism.” – George Washington

As reported by Frontiers of Freedom, the above quote was said by George Washington in his Farewell Address, on September 19, 1796. Washington was, of course, the first President of the United States, and he served in office for 8 years, from 1789 to 1797. He died in 1799, at the age of 67, and the cause of death was ruled as epiglottitis and hypovolemic shock, according to NCBI.