More People in the U.S. Watched the William-Kate Wedding vs. the Charles-Diana Wedding, But Harry & Meghan’s Wedding Got the Most TV Views

GettyBritain’s Prince William (L) and his wife Kate, Duchess of Cambridge, leave Westminster Abbey after the wedding service in central London on April 29, 2011.

The royal wedding of Prince William and Kate Middleton, which took place in 2011, had nearly 23 million viewers in the United States alone, Deadline reported. The wedding was broadcast from 6 a.m. to 7:15 a.m. Eastern across 11 networks, and ratings made network history. The combined viewership was 22.77 million, including ABC, CBS, NBC, Telemundo, Univision, BBC America, CNN, E!, Fox News, MSNBC, and TLC.

Prince Charles and Diana’s wedding in 1981 was viewed by 17 million people across three broadcast networks, in a time before cable, Deadline reported. Comparing households in the U.S., the William-Kate wedding had 18.6 million views vs. 14.2 million for Charles-Diana. Charles’ wedding to Camila Parker Bowles drew far fewer views: only 3.65 million viewers.

And the ratings for Prince Harry and Meghan Markle’s wedding were just announced. In the U.S., 29.2 million Americans tuned in, which far surpassed the 23 million for William and Kate and the 17 million for Charles and Diana. Despite the wedding being so early in the morning, more than 23 million tuned in across 15 networks in the United States. This includes 17.6 million viewers from NBC, ABC, and CBS alone between 6 and 9 a.m. Eastern. Fox had 2.036 million views.

More People in Britain Watched the Charles-Diana Wedding on TV vs. the William-Kate Wedding, & Both Outpaced the Harry-Meghan Wedding in the UK

GettyLady Diana, Princess of Wales and Charles, Prince of Wales are seen during their wedding at St Paul Cathedral in London 29 July 1981.

And how did British viewers compare? Nearly 27 million British TV viewers watched the William-Kate wedding live on three TV broadcast channels, according to Deadline. Meanwhile, nearly 28.4 million British TV viewers watches the Charles-Diana wedding live. Although the William-Kate wedding drew a slightly smaller number of viewers than the Charles-Diana wedding, it still was among the top 10 programs ever watched in the UK.

The Harry-Meghan wedding had a lower TV viewership in the UK, Deadline just reported. Around 18 million people in the UK watched, compared to 27 million for William-Kate and 28.4 million for Charles-Diana. The Harry-Meghan numbers included 13.1 million from BBC One from 9 a.m. to 2 p.m., 3.6 million from ITV, and about 500,000 apiece from Sky News, Sky One, and BBC News.

Despite Harry-Meghan’s wedding having the smallest viewership of recent royal weddings in the UK, the wedding was the most-watched TV event in the UK this year. It’s possible that increased Internet interest might partially account for lower TV numbers.

Worldwide, the numbers vary widely. It was estimated that across the world, 750 million people watched Prince Charles marry Lady Diana Spencer on July 29, 1981. This estimate, shared by BBC in 1981, is very different from the U.S. and British totals listed above. It’s not quite clear how those numbers got so high, especially since there were no Internet views to add to those numbers back in 1981.

Worldwide numbers for William and Kate were estimated to include tens of millions around the world, including 72 million live streams on YouTube and 36.7 million watching on TV in the UK alone. These numbers still seem to indicate that far more people watched the Charles-Diana wedding live, across the world, than the William-Kate wedding. However, there are even more Internet numbers to account for when it comes to William and Kate, which may get the totals closer. For example, 9.4 million watched on the BBC website.

It Currently Appears that Harry & Meghan’s Wedding Has Roughly the Same Total Viewership as William & Kate’s, But the Numbers Are Still Being Evaluated

Early projections had estimated that more than three billion people would watch Harry and Meghan’s wedding across the world, compared to the two billion who watched the Duke and Duchess of Cambridge marry at Westminster Abbey. Keep in mind that these numbers, provided by Harper’s Bazaar, include TV and Internet view estimates.

However, Telegraph reported a few hours after the Meghan and Harry’s wedding that an estimated 1.9 billion watched the royal wedding on May 19. This would be roughly equal to the 2 billion estimates for Kate and Willam that Harper’s Bazaar provided, including TV and Internet and in-person.

However, some people doubt the two billion estimate for William and Kate’s wedding. Deadline reported that the largest ever global audience for a TV event was 1 billion in 2008 for the Olympic games in Beijing. It was doubtful that 1/3 of the world’s population at the time watched the royal wedding, skeptics said at the time.

But now that skepticism is going to be put to the test. It’s not outside the realm of possibility that Meghan and Prince Harry’s wedding will have the greatest views and ratings yet, considering how many more people have access to the Internet and are using social media now than even as recently as 2011.

We will update this story later on Sunday, when more estimates are available for the wedding.

GettyPrince Harry, Duke of Sussex and Meghan, Duchess of Sussex head up The Long Walk back into Windsor Castle.

But in contrast, Westminster City Council reported in 2011 that the Prince William and Kate Middleton’s wedding was watched by nearly a million people on the streets of London. It was a huge affair, celebrating the wedding of the man who was second in line to the throne. Their procession took them from Westminster Abbey to Buckingham Palace, and they shared a balcony kiss that delighted the crowd.

GettyA general view shows the Mall and Victoria Memorial filled with well-wishers celebrating the Royal Wedding of Prince William, Duke of Cambridge and Kate, Duchess of Cambridge on April 29, 2011.

The 1981 wedding of Prince Charles and Diana drew 660,000 spectators lining the procession from Clarence House.  They had 3,500 guests at St. Paul’s Cathedral. Part of the reason they chose the Cathedral over Westminster Abbey was to have a longer procession through London.

GettyLady Diana, Princess of Wales and Prince Charles of Wales at their wedding in London at St Paul Cathedral 29 July 1981.

The difference in numbers might also lie in how the processions were done and where they took place. William and Kate’s processional rode through central London around Buckingham Palace, and they were married at Westminster Abbey. Harry and Meghan’s procession was just as beautiful and just as happy, but it was also quite different. They rode in their own Ascot Landau carriage around Windsor castle and were married at St. George’s Chapel, a smaller but beautiful venue.  Windsor’s council advised that camping was forbidden for this procession, and tents were also banned. 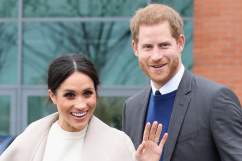 How Long Is the Royal Wedding & When Does It End?