Twenty One Pilots have caused an uproar online by teasing their latest album. They’ve provided clues, cryptic letters, and an email to the subscribers of their website that read: “ARE YOU STILL SLEEPING?” with the image of a yellow eye. Many of these letters have come from a person named Clancy instead of band members Josh Dun and Tyler Joseph. But who is Clancy? Is he a third member of the band or an alias for either member? Read on to learn about him below.

There have been many theories about Clancy since he was first introduced. The most commonly accepted among fans, and the one that has been perpetuated in several fan theories, is that Clancy is a manifestation of the latter’s emotional state. He is a fictional character, much in the way that Blurryface was a character in the group’s 2015 album of the same name.

“Clancy isn’t Tyler. Clancy isn’t Josh. Clancy is Clancy,” wrote Reddit user r/twentyonepilots. “I think this is a question we’ve all been asking ourselves since we first saw Clancy’s letter.”

The letter that r/twentyonepilots is referring to was first published on demaorg.info. The site is currently unavailable, but we have several screenshots of the letter and various other clues below. In the letter, Clancy speaks of an epiphany he had. He says that it wasn’t until his ninth year that he realized “Dema” wasn’t his home as he once thought it was. Instead, he had come to see “Dema” as a trap. The nine years aligns with how long Twenty One Pilots has been in existence.

then in the letter clancy talks about finding out in his ninth year (it’s been nine years since twenty one pilots was created) that dema wasn’t his home.. it was his “trap.” pic.twitter.com/uDrZ3w5d57

“It was upon my ninth year that I learned Dema wasn’t my home. This village after all of this time, was my trap,” he writes. “Before I became realized, I had deep affection for Dema. There was a wonderful structure to the city that puts my cares to rest.”

Twenty One Pilots have spoken of Dema while promoting the new album. While accepting the award for Most Dedicated Fan Base at the 2017 APMAs, Dun said that Joseph couldn’t attend because he was “severing ties with Dema.” According to Wikipedia, the word “Dema” means “Tower of Silence” in Iran.

Will Clancy Factor Into their New Album?

r/twentyonepilots goes on theorize that Clancy is the opposite of Blurryface, who represents Joseph’s dark thoughts and “makes him do bad things.” Clancy, they reason, is the exact opposite, he is the good thoughts striving to make him do good things. The theory also points to Dun’s comments at the AMAs to suggest that Clancy will be the narrative focus of their upcoming album.

Clancy’s most recent communication with fans came via a second letter, which appear to relate to the Pilots’ “YOU ARE STILL SLEEPING” message. Check it out below.

They’re asleep. The night took forever to arrive, and now we’re almost ready. We’ve studied the watchers, and know that there’s no chance that we can step through unnoticed. So, instead of trying to hide ourselves, we’ll make sure that all of us are noticed. It’s been one year since the last convocation, and tomorrow’s Annual Assemblage of Glorified will be the biggest spectacle this concrete coffin of a city has seen all year.

If we time it right, we’ll divert the attention of the watchers and finally take the step through. We’ve had no contact, but we’re hoping the other side will be able to find a way in. We’re not sure of the breach location, but we are willing to risk being smeared in order to find it. We know that we must go lower, and wait for the torches. They’ve never seen anything quite like this, and by morning, everything will be different. I’m terrified and excited, all at the same time. They don’t control us.

To learn more about the upcoming Twenty One Pilots release and when its scheduled for release, continue reading our five fast facts on the album. 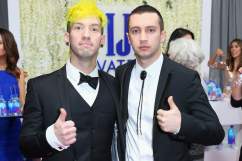