R. Kelly has three kids with his ex-wife Andrea Lee. The R&B singer was married to Lee from 1995 to 2009, and has made a point of  keeping the lives of his ex-wife and children out of the spotlight.

Kelly’s children include Joann, born 1998, Jaya, born 2000, Robert Jr., born 2002. Jaya made headlines in 2014 when she came out as transgender, changing her name from Jaya to Jay. “I came out through a text to my mum and then I told her when I got more comfortable,” Jay wrote online. “I told her because I knew she would love me no matter what, she has not once judged me in my life. She always told me that she loved loved and to be who I truly am.”

Jay also wrote: “I believe I am a boy and want surgery, and the medication to help me (be) who I was supposed to be.”

Kelly addressed his child’s announcement in a WCGI interview, where he said he initially didn’t believe the reports. “You don’t really wanna open it by saying my daughter is becoming my son,” he explained. “Don’t even give the blogs that kind of credit. As far as that is concerned, always believe what you see with your own eyes, that is. Always believe what you see. That is the best way to go about business.”

The “I Believe I Can Fly” singer went on to say that he supports his child’s position. “I’ve heard a lot of things about a lot of people and it was never true. You gotta know there’s a back story,” he said. “There’s a background. That’s why you can’t judge nobody. You save money so your kids can go to college — no matter what they are or who they are, they’re your kids, you gotta support them.”

Joann is the only one of Kelly’s children who have publicly addressed his sexual harassment claims. In a TMZ interview, Joann said: “It’s very close to my heart,” she said. “It’s just hard ’cause it’s family matters. But overall, it’s hard. I try not to speak about it too much, but it is what it is. I feel terrible.” When asked whether she is still close to her father, Joann stated: “We’re family. We’re gonna deal with each other.”

Joann has a YouTube channel where she uploads cover versions of popular songs. She performs under the stage name Ariiraye, and made her recording debut on her father’s song “Wanna Be There.”

Kelly’s ex-wife Andrea spoke to about the bullying that her children faced as a result of the singer’s controversies. “My daughter, she just shared with me, my oldest is 20 now, and in middle school, they had a day when they all had to come in and read. So the little boy mate in class as Joann goes up to read, he says ‘Oh well, Joann does your daddy pee on you at night instead of read bedtime stories?'”

“The devastation of going through that as a mother,” she said. “You try to protect your children from so much. I felt like the abuse I was able to shield from them and I was able to somehow justify because it was never toward me, it was never my children. It has taught them a tough lesson that no matter what your father does, good, bad, or indifferent, you are you an individual.” 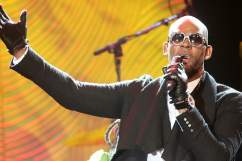