Despite having released countless promotional singles and a whopping double album last week, it seems as though Drake still has some music in the stash. The Canadian rapper took to Instagram on Saturday morning to announce that he will be airing a “post-Scorpion mix” for those who tune into his Apple 1 series OVO Sound Radio at 6 p.m. EST.

Its unclear whether Drake means that he will play a mix of the songs he released on Scorpion, or debut unreleased songs that didn’t make the album’s final tracklist. Either way, there are two different ways to access OVO Sound Radio, and both require a subscription to Apple Music. Below we have listed the ways in which you can listen to the episode without having to pay.

How do I stream OVO Sound Radio?

Back on OVO sound radio today with a little post Scorpion mix for my people @octoberfirm ?

You will be able to stream OVO Sound Radio on Apple Music after the livestream. If you have an Apple Music account, you can go into the app on your phone or tablet and set the notifications to alert you when the album is out. Click here to learn how.

If you don’t have an Apple Music account and want to try it out, you can click here to start a free 30-day trial. If you cancel during your trial period, you’ll continue to have access to the entire Beats 1 catalogue until the date that you would have been billed for the full price.

You can also access the episode through the official OVO Sound website. The site has a back catalogue of all previous OVO Sound episodes dating back to 2015, and includes links to merchandise and music videos featuring Drake. You will still need an Apple Music account to access each episode.

“Back on OVO sound radio today with a little post Scorpion mix for my people,” Drake wrote in the Instagram caption. This is not the first time that Drake has teased new music on OVO Sound Radio. He has dropped several popular songs on the Apple Music platform, including “Hotline Bling” (originally titled “Cha Cha Remix”), “Right Hand,” and the entirety of his 2017 playlist More Life.

The belief that Drake has new music on deck has been further supported by the release of the “Behind Bars” freestyle, which he released on Saturday morning. It premiered on the UK rap channel Link Up TV, and sees the rapper adapt a UK accent during his extended verse. Check it out above.

It is also possible that Drake will debut collaborations with other artists, namely OVO artists like dvsn and PartyNextDoor or longtime dancehall associates like Popcaan.

Drake recently hopped on Instagram to promote Popcaan’s album, which is set for release on July 20th. Its very possible that fans may get to hear another Drake and Popcaan track, after the original version of “Controlla,” which you can listen to below.

Popcaan was also sampled on the Drake and Rihanna duet “Too Good,” from the 2016 album Views. 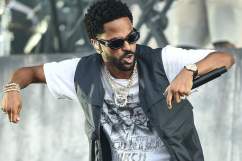