In May 2018, Roseanne Barr put an end to her long-running, successful show, Roseanne, with a racist tweet that sent social media into a frenzy and turned the entertainment industry upside down. In the past, Barr was considered a controversial actress and comedian, and today, she has practically been blackballed for her actions, leaving her fellow cast members offended, fans upset, and many workers without jobs. Fortunately, the ABC network and Barr came to an agreement so that the show could continue without her, in a spin-off show titled The Conners.

On Thursday night, July 26, 2018, at 9 p.m. ET/PT, Barr sits down for her first televised interview since her offensive Twitter incident sent her career and legacy into a downward spiral. Fox News host Sean Hannity is set to conduct the interview, in which USA Today reports Barr will “react to reports about the tweet that got her fired” and talk about President Donald Trump.

If you would like to watch the interview but don’t have cable or can’t get to a TV, you can still watch the Fox News channel live on your computer, phone or streaming device by signing up for one of the following cable-free, live-TV streaming services:

The Fox News channel is included in the main “Fubo Premier” channel package. You can sign up for a free 7-day trial, and you can then watch the show live on your computer via the FuboTV website, or on your phone, tablet or streaming device via the FuboTV app. 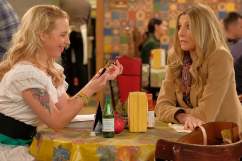 In addition to a Netflix-like on-demand streaming library, Hulu also offers a bundle of live TV channels, including the Fox News channel. You can sign up for “Hulu with Live TV” right here, and you can then watch a live stream of the show on your computer via the Hulu website, or on your phone, tablet or streaming device via the Hulu app.

In recent weeks, Barr has been posting her thoughts on her YouTube channel, staying away from the media. She even said she wouldn’t be doing any TV interviews, so sitting down with Sean Hannity is definitely a move in a different direction. On July 9, 2018, Barr wrote, “After a lot of thought, I decided that I won’t be doing any TV interviews, too stressful & untrustworthy 4 me & my fans. I’m going to film it myself & post it on my youtube channel in the next week-the entire explanation of what happened & why! I love you all-sign up & get ready.” Clearly, she has had a change of heart.