Getty Usher during a concert

Tonight, Usher is dropping his ninth studio album A. The album was announced earlier today on the singer’s Instagram, along with a tracklist and a video trailer that shows him and producer Zaytoven at various landmarks in Atlanta.

How to Stream & Listen to Usher’s New Album ‘A’

Usher’s album will be made available on a number of different platforms at 9 p.m. Pacific Thursday (Oct. 11) or midnight Eastern Friday (Oct. 12) depending on your time zone. We’ve listed the streaming platforms that the album will be released on, and the ways in which you can listen to them below.

You will be able to stream Usher’s new album on iTunes and Apple Music. If you have an Apple Music account, you can go into the app on your phone or tablet and set the notifications to alert you when the album is out. Click here to learn how.

Based on the standard release schedule for Spotify, Usher’s A will also be available to stream on the platform. If you don’t have a Spotify account, you can sign up for one here and pay only $0.99 for the first three months.

Usher’s new album will also be available to listen to on Tidal. The streaming service offers a free 30-day trial with Tidal Premium, which provides  access to music videos and curated playlists.

Usher shared a video trailer to go with the album’s unveiling, which shows him riding around with fellow Atlanta native Zaytoven and stopping by at Waffle House and the Cascade Family Skating rink. He also shared the album’s official tracklist, which you can check out below.

There are no listed features, but its possible that he wanted the features to be kept secret until release time. This is something that’s been popularized over the past few years, with artists like Young Thug and Travis Scott putting it into practice. Drake rolled out the tracklist to his 2018 double album Scorpion in a similar fashion.

Snippets of the album can heard throughout each of the album’s promotional videos. The tracks seem to be produced in a trap style more in line with Zaytoven’s music than Usher’s. The legendary singer rose to fame with a mixture of pop and R&B, and some Twitter users have raised an eyebrow at the idea of him chasing a “younger” sound.

The Album Teases a New Trap-Influenced Sound for Usher

“Unless Usher is revisiting his 90s R&B roots I’m not really interested in a new album,” wrote one skeptical user. Another tweeted: “Usher… This new album better be Confessions vibes or else you can keep it. And that’s all I have to say about that.”

Others have been more optimistic, and feel that Usher still has what it takes to drop great music. “Usher new album ayeee!!! can’t wait!,” wrote one eager fan, while another tweeted out: “Usher new album tonight produced by Zaytoven… might be the greatest thing ever.” 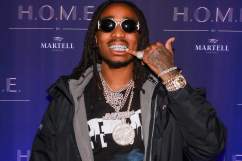