If you’re anything like other fans around the country (and the world), then you’ve been scouring the Internet for any details you can find about Season 5 of Black Mirror. A long time ago, we heard that the season might release in December 2018. Now it looks like we’ll at least get a movie, if the rest of the season isn’t released immediately. Heavy reached out to Netflix for details about Season 5, and Netflix simply said that they weren’t commenting. But quite a few clues have been dropped online that might provide some hints about what’s to come, including a movie called Bandersnatch. Read on to see what we know so far about Bandersnatch and Season 5 of Black Mirror. This will contain minor spoilers for the episode.

Netflix tweeted and then deleted a tweet that said Black Mirror Bandersnatch was among the planned releases for December (you can see the now-deleted tweet above.) It was listed as coming on December 28, just three days after Christmas. This could make it another Christmas special, like the one that fans loved before.

The tweet was found by Redditor u/eyezofnight. If this is going to be some kind of interactive episode as rumored, it might be worth following KCC Communications on Twitter here.

Still, most fans don’t believe that Season 5 will be releasing in full on December 28. One episode just wrapped last week, leaving little time for production to be completed before a full season release. However, Netflix has been releasing half seasons more frequently, such as with Arrested Development. So there’s always a chance that half of the season will be released on December 28. But it’s more likely it will just be one film-length Christmas special. However, Netflix did release all of Season 4 on December 29, 2017, so a full-season release date isn’t completely out of the question.

Bandersnatch Will Be a Film That’s 90 Minutes Long

If you search for “Bandersnatch” on Netflix, you’ll see the following on the desktop version, confirming that this is a Black Mirror installment of some sort coming soon. It’s listed as a Netflix film rather than an episode, which sounds like it’ll be more like the White Christmas special instead of an episode in Season 5.

A search for Bandersnatch on Netflix mobile reveals that the “episode” will be 90 minutes long:

It looks like Bandersnatch will be longer than White Christmas, which was 73 minutes long.

By the way, if you just search for “Black Mirror” on Netflix, you’ll see Bandersnatch as the second result on the list. It’s the episode without a title that just shows the Black Mirror loading screen. The Black Mirror next to it is the regular series with all four seasons.

Bandersnatch’s Description Reads: ‘Be Right Back’

The only description for Bandersnatch on Netflix so far reads “Be right back.” A release date is not included, but you can add it to your Netflix list by going to this link and clicking “My List.”

On the Korea Media Rating Board listing, discussed on Reddit here,  a synopsis reads: “A young programmer makes a fantasy novel into a game. Soon, reality and virtual world are mixed and start to create confusion.” It’s not yet known if this listing is accurate.

A Photo Reveals That Will Poulter Might Be in the Episode

Redditor u/gymnol7412 found this photo of Bandersnatch on their Smart TV app for Netflix. It seems to show Will Poulter in the picture, although this has not been confirmed. Will Poulter is an English actor known for Maze Runner, Detroit, War Machine, The Revenant, Glassland, We’re the Millers, The Chronicles of Narnia: The Voyage of the Dawn Treader, School of Comedy, and other appearances.

A CV found online for Poulter listed Bandersnatch as one of his credits and said he would play the role of Colin Ritman.

Other fans are wondering if the person on the left in the picture might be RJ Mitte, known for his role as Walter White Jr. on Breaking Bad. However, other fans think this is Fionn Whitehead, who was listed in an article about Bandersnatch on Princestone that was later taken down. Whitehead is known for playing the protagonist in Dunkirk. The post mentioned that Will Poulter would also be in the episode, and Craig Parkinson. It was directed by David Slade, according to the now-deleted post. You can see a discussion about the post on Reddit here.

Netflix revealed earlier that one of its Black Mirror episodes for Season 5 would be an interactive choose-your-own-adventure type of episode. Fans are hoping this might be it, and that’s why it needs to be longer than a typical Netflix Black Mirror episode. Bloomberg reported that a choose-your-own-adventure style episode would be part of Season 5, debuting near the end of 2018.

Although Netflix did not respond to Heavy with any details about the episode, only to say they couldn’t comment, when The Verge reached out Netflix responded: “Thanks for reaching out! You have the ability to choose your own response from Netflix: this or this.” However, this was in response to The Verge on October 1 about an interactive Black Mirror episode in general and was not specifically about Bandersnatch. The links in the response were to this and this.

A listing on the Korea Media Rating Board shows Bandersnatch as being 312 minutes long. This might account for all the various story angles and branches if this is indeed the choose-your-own-adventure styled episode. However, the reason for the 312-minute listing hasn’t been confirmed.

Bandersnatch Was Filmed in London & Could Be Set in the 1980s

In April, residents in Croydon (a town in London) reported seeing a Black Mirror episode being filmed that took place in the 1980s. Could this be a reference to San Junipero, which largely took place in a virtual reality version of the 1980s? Fans have been wanting a followup to San Junipero since it was released.

Here’s one photo from the filming:

Apparently they are filming a Black Mirror set in The Past, so naturally they're in Croydon. See vintage WH Smith and Chelsea Girl. pic.twitter.com/q54HQZChoT

Sources reported that the filming in London was for Bandersnatch:

To add to your pictures is that they are filming in our building in #croydon today pic.twitter.com/3a18e9HAp7

This photo was shared by u/JimmerUK on Reddit eight months ago: 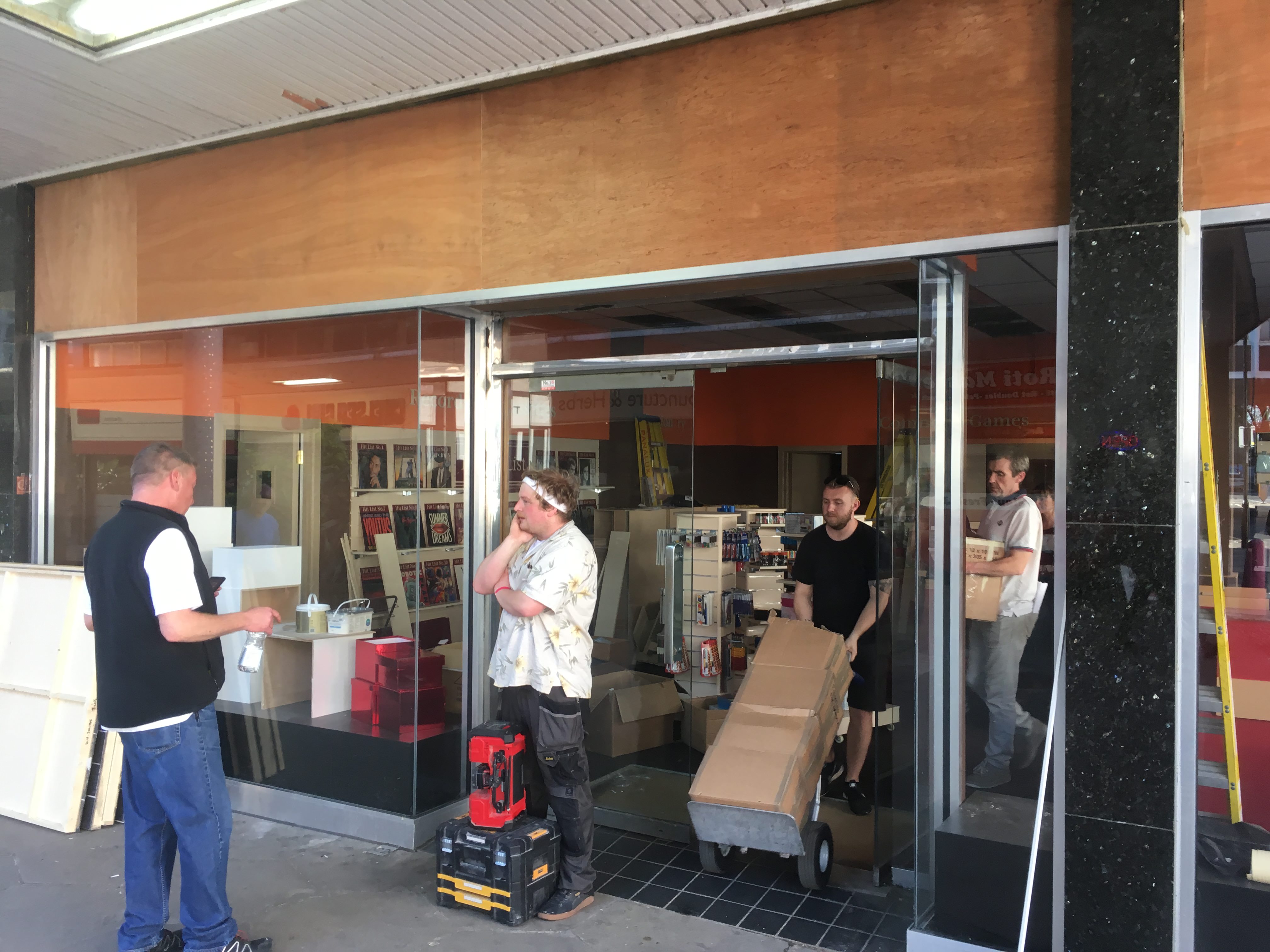 This showed up in St George’s Walk Croydon today. It’s not an archive pic. It’s kitted out with 70s and 80s music, books etc. Retro shop or film set? pic.twitter.com/Tvkbzn2WRQ

Like many other Black Mirror episodes, Bandersnatch already has ties to a previous episode in the series. In Season 3’s Playtest, a reference was made to a UK game called Bandersnatch that was released in 1984 (which is also the year that Playtest took place.) The game is also referenced on the cover of a magazine in the episode.

Bandersnatch is also the name of a creature in Through the Looking Glass by Lewis Carroll.

Bandersnatch also happens to be the name of a game that was never actually released, but was developed in 1984:

Eventually the rights were sold and the game became Brataccas about a genetic engineer trying to create an elite soldier. According to Wikipedia: “Brataccas is believed to be the remains of the much hyped vaporware project Bandersnatch, which was partially developed by Imagine Software. Having been talked about in the press for some time before finally emerging, Brataccas saw considerable coverage in the computer press. It was generally reviewed poorly due to significant control problems, although the graphics were widely praised.”

One Redditor claimed to know what all six episodes in Season 5 were going to be about, but didn’t reveal their sources. This might not be very accurate, so you should probably take this with a grain of salt for now. The Redditor, u/theahsfan, only said “I have friends who know people.” Here’s what they wrote:

Like we said, there’s not really any reason to believe this is accurate, because no details were shared to authenticate the rumors. But if you enjoy reading rumors and speculating on Season 5, you should definitely add this post to your list of reading material. One Redditor, u/Automaton120, said they doubted the list because they had heard one episode would involve a police chase and was tentatively called “Hot,” and another mentioned on a casting site was tentatively called “Striking Vipers.” Neither is listed in the post above.

One rumor we now know is true is that Miley Cyrus will be in one of the episodes. She confirmed the rumors on Howard Stern.