Nikki Bella is officially moving on after ending her six-year relationship with John Cena. Bella, 35, is now dating her former Dancing With the Stars partner Artem Chigvintsev. According to Life & Style Magazine, the couple have been “seeing each other for a while.”

Bella appeared on the reality show’s 25th season in 2017, during which time she met and got close with Chigvintsev. Bella has continued to supported Chigvintsev during his participation in the spinoff series Dancing With the Stars: Juniors last summer, and the couple have been spending a lot of time together despite their busy schedules.

“They got together for dinner and the chemistry from the dance floor came right back,” says an insider close to the couple source. “They hit it off. They’re taking it slow, but they’re really into each other.” Get it, girl!

Chigvintsev, 36, is a professional ballroom dancer who’s currently on a national Dancing With the Stars live tour. Despite this, he and Bella were seen at a San Diego farmer’s market together over the Christmas weekend. “They got together for dinner and the chemistry from the dance floor came right back,” a source told The Inquisitr. “They hit it off. They’re taking it slow, but they’re really into each other,” the source revealed.

The new couple will be a focal point on the upcoming season of Bella’s reality series Total Bellas. While some fans initially thought that the WWE star would be involved with Bachelor alum Peter Kraus, based on early promos, season four will show Bella going on dates with Chigvintsev and determining whether she wants to relocate from San Diego to Los Angeles.

Bella & Chigvintsev Are Reportedly ‘Really Into Each Other’

The relationship comes less than a year about Bella broke up with longtime boyfriend John Cena. She publicly announced their split in April after their engagement was called off. “After I called off the engagement, we tried to work on our relationship to get back to where it was in order to move forward with our wedding,” Bella said. “After much time and soul-searching alone, and together, we have decided to officially part ways. I had a beautiful and loving six-year relationship with a wonderful man. I have the utmost respect for John, but I know this is what’s best for me.”

Back in December, Bella told Us Magazine that she wanted to enjoy her time being single before she got into another relationship. “I haven’t been able to really enjoy the single life properly,” she said during the Jingle Ball 2018. “It’s hard being a single girl. Over the holidays, I’m really looking forward to wandering into some bars and being a single girl. I’m looking forward to touching home base and being able to live a real single life vs. just being out on the road and single.” 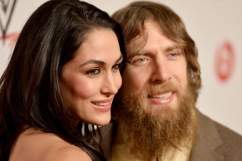