Getty Lady Gaga and Bradley Cooper attend the UK premiere of 'A Star Is Born' held at Vue West End on September 27, 2018 in London, England.

Jackson Maine and Ally were the lead characters of A Star Is Born and they captured the hearts of people across the nation. Played by Bradley Cooper and Lady Gaga, the characters showed the ups and downs of love, the harsh realities of show business, and the effects of mental health on relationships. Ally and Jackson also gave viewers a look at the damage of substance abuse. This was the fourth remake of the original film and, though Cooper was not nominated for Best Director at the Oscars, the film and Gaga received several other Oscar nominations. The movie has also been killing it with its original song “Shallow,” that the two stars sing together.

With fans being so in love with Cooper and Gaga’s characters and chemistry, it makes one wonder how much the stars are actually like their characters. They clearly are fond of each other in real life, but Cooper is in a relationship with his longtime girlfriend Irina Shayk, with whom he has a child.

As for the similarities to their characters, let’s start with Gaga. Well, she and Ally are both singers and songwriters, so that’s an easy one. But, in an interview on the E! red carpet, Gaga said that it’s Jackson’s love for Ally that changes her life. Similarly, Gaga said she felt that Cooper’s belief in her is what changed her life with the part of Ally in this movie.

Also, in the movie Ally struggles with her image and her look. Over the years, Gaga, herself, has faced criticism for her look and she says that she had similar challenges in her career that Ally faces in the film. On E!, Gaga said that Ally didn’t believe in herself the way Gaga did. She said she had to be vulnerable in a way she wasn’t used to. So, other than some of their professional challenges and their vocals, Gaga said that Ally was totally different from her.

When it comes to how Cooper has related to his character, he didn’t have as many similarities. In fact, he worked for six months on becoming the character, learning to sing, lowering his voice, you name it. But, Cooper did have a real person as inspiration for the character, and that was Pearl Jam front man Eddie Vedder, according to Vanity Fair. In fact, Cooper flew out to meet the musician and study his mannerisms. 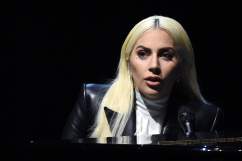 Cooper told Yahoo, “I went up to Seattle and spent four or five days with [Vedder] and I asked him 9,000 questions. And he gave me minor, little things that only musicians know about what to do, just aesthetically and the inner workings … He was wonderful.” Cooper also joked that Vedder tried to dissuade him from doing his own singing in A Star Is Born.

Going into this movie, this was Cooper’s directorial debut, but it was his first time as a singer, while it was Gaga’s first time starring in a film. Gaga recalled, “It meant a lot to me, and I think to both of us, that at the beginning of making this film we kind of shook hands literally and he said, ‘You are an actress.’ I said to him, ‘You are a musician.’”