For most of season 17 of American Idol, the show has been shown at 8-10 p.m. EST on Sunday. The time slot will be extended for tonight’s finale, however, which airs at 8 p.m. EST and runs for three hours. The finale will conclude at 11 p.m. EST. As always, the show will air on the ABC network.

TONIGHT'S THE NIGHT! Is your next #AmericanIdol Madison, Alejandro, or Laine? Get ready to vote and find out tonight during the first ever live coast-to-coast Finale results in Idol history!

Last year’s Idol winner, Maddie Poppe, who previously appeared during this season, is set to appear, but there is reportedly some drama behind the scenes. Variety states that “It was not always a hard and fast rule to have the previous year’s winner at the finale.” Whether she is singing or not, Poppe is said to be making an appearance at some point during the episode.

In 2018, Disney Music Group president Ken Bunt stated that he would like Idol to incorporate past winners on a more consistent basis. “Something I was pretty emphatic about, that always felt like a miss for the show, was that we have to continue telling the story of the winner,” he said. “By tapping into built-in Disney assets, the label can tell that story in a variety of ways. More opportunities with ABC, when you think of the specials they have; what we could be doing with the parks; maybe a TV show on Freeform. Previous ‘Idols’ never did that. We want to keep the talent from the show at top-of-mind for the rest of the year.”

‘American Idol’ Finale Will Start at 8 P.M. EST on ABC

Just thought we'd remind you… a new #AmericanIdol will be crowned THIS SUNDAY! ?

Idol judge Katy Perry talked to Entertainment Tonight about the finale, and what fans should expect. “Honest to God, we are following our intuition. There is no script, this is just like the universe giving us gorgeous blessings,” she explained. “With these two I wish we had a script but sometimes I’m out there all by myself thinking, ‘What’s going on?’… We’re so invested.” Her fellow judge Lionel Richie added, “No, it’s all spontaneous. What you see is what’s really happening. No one is going home, everyone is going to work.”

All three judges will be taking the stage to perform at some during the finale. Perry will take the stage with Jeremiah Llyod Harmon and her “Con Calma” remix partner Daddy Yankee. Luke Bryan will perform “Knockin’ Boots” and “Every Breathe You Take” with Laci Kaye Booth, while Richie will perform his classic single “Dancing on the Ceiling” with the entire top 10. 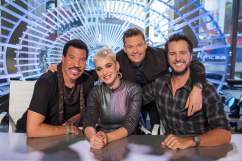