What would happen if Superman was evil? This question is the at the core of director David Yarovesky horror film, Brightburn. The movie revolves around a young couple discovering an alien ship that crash lands outside their remote farm. Inside the vessel is an infant boy which gets adopted and raised by the Breyer family. Brightburn picks up 12 years later with the Breyer’s now pre-teen son Brandon discovering he has a variety of superpowers including super speed, super strength, near invulnerability, and laser eyes. However, unlike Superman, Brandon is a sociopath who believes that he is superior to humans and posses one hell of a temper.

Below we will be discussing and breaking down the ending for Brightburn. There are going to be a lot of spoilers so if you want to go into the film blind we recommend you stop reading. With that said, here is what happens at the end of Brightburn and what the post-credit scenes mean. 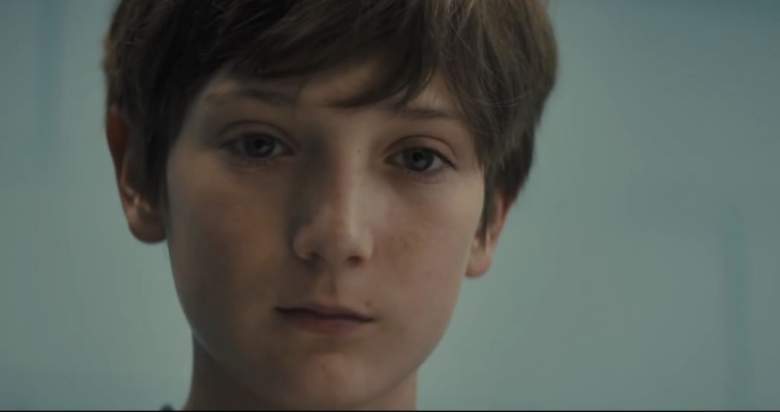 The first half of Brightburn focuses on Brandon learning about his powers after nearly discovering the crashed ship that’s hidden away in the Breyer’s stable cellar. Driven by alien voices in his head, Brandon’s personality begins to change too a much ruder and colder version of himself. His first act of violence is him breaking the hand of a young girl who denies his affection. This leads to the girl’s mother rightfully blaming Brandon and telling her daughter she cannot see Brandon anymore.

Sadly, this choice doesn’t go well for the mother as she is killed the following night by Brandon with her body mysteriously disappearing. After getting a taste for blood, Brandon becomes more hostile to his mother Tori and father Kyle. Brandon then goes after his aunt Merilee who is also Brandon’s guidance counselor at the school he attends.

During his mandatory guidance meeting, Brandon confesses that he isn’t remorseful for hurting the young girl. This concerns Merilee, who explains that she will need to tell the sheriff that he is making no progress. Brandon doesn’t take this well and visits the young woman in the middle of the night. Threatening her, Brandon then stalks Merilee as she goes to bed, but shifts his sights on Merilee’s husband and his uncle, Noah. Drunk, Noah stumbles throughout the house and discovers Brandon hiding in the closet. Furious, Noah drags the young killer out of the house, scolding him and promising to tell his parents.

Brandon lashes out, eventually slaughtering Noah as he tries to escape in a car. Believed to have died in a drunk driving accident, Brandon’s parents become increasingly more suspicious of his actions. This culminates in the boy shoving his father into a cabinet after being accused of lying. Justifiably upset, Kyle rummages through Brandon’s room, discovering the dirty and bloody shirt he wore the night he murdered Noah. The dad then brings his son out into the woods with the intention of killing him.

Brightburn’s third act kicks in with Brandon’s father attempting to kill him in the woods. It turns out that he is bulletproof and this betrayal pushes Brandon over the edge. In a fit of rage, Brandon burns his dad’s skull with his laser beam eyes. At the same time, his mom Tori discovers a notebook full of gruesome drawings that depict Brandon’s kills throughout the film. Horrified, she frantically calls her husband only to learn of his demise from Brandon.

The young boy then attacks his former farmhouse, trashing it as he flies through the building. Tori takes cover under the counter and calls the police because they are absolutely going to stop evil Superman. Shocking no one, when the sheriff and another police officer arrive they are brutally killed by Brandon. However, this gives Tori just enough time to escape and head for the stables. Even though he is presumably immune to anything on Earth, we do learn early on that the material on the spaceship he arrived in cuts his skin.

Tori knows this and breaks a piece off the ship to use as a weapon. In a last-ditch attempt, Tori attempts to comfort her son who is waiting for her. He explains that he wants to do good and hugs his mother. She then tries to stab him, but Brandon catches her arm and realizes what she is doing. Furious and emotionally broken, Brandon grabs his mother and launches into the sky. Having been betrayed by everyone he loves, the boy drops his mother out of the sky to her death.

Brandon then destroys a plane flying overhead, using the crash as a way to cover his tracks and parent’s murder. Brightburn ends with a bunch of news footage showing Brandon – now called Brightburn because his first sighting was in Brightburn, Kansas – destroying buildings and killing people. Still wearing his mask, Brandon’s identity is presumably still a secret and his existence is considered a conspiracy.

While it’s never explained, there’s a chance that Brandon’s alien race function like wasps. Early on in the film, Brandon is asked to explain the difference between bees and wasp. He states that wasps are simply predators programmed to hunt. This could be seen as a direct parallel to Brandon who willfully gives in to his power and shows no remorse for killing people. Brandon is a wasp. A creature that simply kills because it’s what he does.

It’s unclear if Brightburn will have a sequel, however, the film’s ending is open enough where one could happen. We see during the credit’s screen an Alex Jones-esc character ranting about other monsters and aliens, which means there’s a chance we get other movies about them.