Farrah Fawcett dated actor Ryan O’Neal for several decades. The couple were one of Hollywood’s most famous celebrity pairings in the 1980s, and their relationship will a main talking point in the new ABC documentary This Is Farrah Fawcett.

Fawcett described their relationship as “volatile” and “spontaneous”, and the couple stayed together until her untimely death in 2009. “You saw them together, they looked hot as a fritter,” said close friend Nancy Collins. “You could feel the steam coming off of them.” Learn more about the couple below:

1. They Met Through Fawcett’s Ex-Husband Lee Majors In 1979

Fawcett and O’Neal met through the former’s husband, Lee Majors. According to People Magazine, Majors and O’Neal were friendly with one another, as they both started their careers on ABC dramas in the 1960s. As such, Majors offered to look after O’Neal’s teenage daughter Tatum, who was shooting a film nearby. “I thought we were once again quite close,” he recalled. “I told Ryan not to worry—I’d take her out to dinner, phone her and look after her.”

In return, Majors asked O’Neal to check on Fawcett in Los Angeles. “I thought she might be lonely and could use the same kind of companionship,” he revealed. “They got all serious and I couldn’t believe it. Ryan really made a play for her. I called him and asked him to lay off a bit. ‘I can’t,’ he told me. ‘I really love her.’ So I said, ‘Okay, buddy, if that’s the way you feel.’ I haven’t spoken with him since.”

Fawcett finalized her divorce from Majors in 1982, when she was already living with O’Neal. They had a son, Raymond, a few years later. O’Neal also had three children from previous relationships; Griffin, Patrick, and the aforementioned Tatum, who acted alongside him in the 1973 classic Paper Moon.

2. O’Neal’s Children Claim That He Cheated on Fawcett & Engaged In Substance Abuse During the 1980s

Fawcett and O’Neal was the most popular celebrity couple in the world during the 1980s. There were often photographed together, and were the subject of tabloid fodder. Despite their exposure, however, the couple’s respective acting careers were hitting the skids. Fawcett’s career took a downturn after she left Charlie’s Angels in 1980, while O’Neal failed to reclaim the box office appeal he had before the 1975 flop Barry Lyndon.

O’Neal’s son Griffin claims that the actor cheated on Fawcett during this period. When asked whether or not he he was faithful, Griffin told Larry King, ” Faithless. He has no faith. Are you kidding?.. It was bombastic at times. There were great times, [but also] very hard times.” O’Neal also dealt with substance abuse throughout the decade.

Despite O’Neal’s substance problems, he insists that it did not extend to Fawcett. During a Vanity Fair interview, he brought up Fawcett’s infamous appearance on Letterman, where many believed that she was on drugs. “She didn’t need substances,” he explained. “I couldn’t even get her to smoke a joint. I was the pothead; she’s one of those people who flossed every night and took care of herself. When I saw her on Letterman, I thought she was acting. She was selling Playboy magazine, and she thought she was being Playmate-ish.”

3. They Split In 1997 After Fawcett Caught O’Neal In Bed With Another Woman

Fawcett and O’Neal’s relationship came to an end in 1997, when the former caught O’Neal in bed with actress Leslie Stefanson. O’Neal recalled the circumstances that led to the affair, and cites the growing distance between him and Fawcett as partially to blame. “I believe Farrah was going through some kind of change. I didn’t have a change of life; I was always a jerk,” he said.

“But they’re hard work, these divas; I was sick of it, and I was unappreciated. I just don’t think she liked me very much,” he continued. “So I excused myself, and I was lucky enough to meet this young girl. She was more a daughter to me than a lover, and my own daughter had flown the coop, so here was this replacement.”

In the aforementioned Vanity Fair profile, O’Neal admitted that the affair was a big mistake, and would do things differently if he had the chance. “I wish I could do it over with her. I would have been much kinder, more understanding, more mature,” he said. “I’d lose some of the savagery.”

4. They Reunited In 2001 & Stayed Together Through Fawcett’s Cancer Diagnosis

Despite their troubled past, Fawcett and O’Neal reconciled in 2001. The latter was diagnosed with chronic myelogenous leukemia, and they agreed to give their romance another shot. “Leslie was gone, and Farrah came to me. We started over again, and this time we built it in a way that had foundation and trust,” he recalled. “Farrah had her home here, and I had my home at the beach, and she would only come on the weekends. Our son was happy. And Farrah was mature. She didn’t get mad at me so easily. I had missed her.”

O’Neal remained by Fawcett’s bedside throughout her treatment, and appeared as himself in the 2009 documentary Farrah’s Story. “They wanted to cut her open and take everything out—that was the cure—but a bathing beauty with a colostomy bag? That would have been a test,” he recalled. “She’s had terrible luck. She tried so many different approaches.”

5. O’Neal Says He Was Supposed to Marry Fawcett on the Day She Died

Despite their lifelong relationship, Fawcett and O’Neal never got married. “We never really considered it,” O’Neal said in 2006. “We didn’t want to do what other people wanted us to do. We were rebels. But now I would do it in a second—if I can get her to wake up long enough. Our son would love it.” He let slip that he actually proposed at one time, using a cigar band as an impromptu engagement, but they got a flat tire on the way to the chapel and they never went back.

In his autobiography Both of Us: My Life With Farrah, O’Neal revealed that he also had plans to marry Fawcett on the day that she died. “I’ve asked her to marry me, again, and she’s agreed,” he wrote, stating that they had plans to tie the knot while she was in her hospital bed. “The priest at St John’s Hospital arrives to marry us but administers the last rites instead,” he added.

The doctor removed her life support on June 25, 2009, and Fawcett died a few hours later. O’Neal told the Hollywood Reporter that he’s yet to recover from Fawcett’s death, but that writing about her life in a book has helped him cope in the meantime. 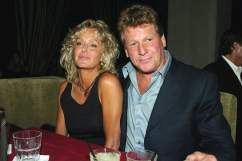