Melissa Heholt will be welcoming her second child with husband J. Cole soon, according to the closing track of his new album.

Along with his Dreamville team, J. Cole released Revenge Of The Dreamers 3. The last song on the 18-track album is a heartfelt declaration of love called “Sacrifices,” in which Cole announces that he and Melissa are expecting their second child.

The six-minute song provides a refreshing change of pace, as the hip-hop genre is not usually a place to find sweet, vulnerable bars about love and family.

“She gave me the gift of my son, and plus we got one on the way,” he announces to the world. “She gave me a family to love, for that, I can never repay, I’m crying while writing these words, the tears, they feel good on my face.”

You know J. Cole married now cause this man made a whole song about folding a woman's clothes

The couple reportedly met when they were students at St. John’s University in New York. Melissa graduated with an M.S. in childhood education and spent some time teaching only to become an sought after event planner in New York City.

There were rumors of an engagement between the two in 2010, however, no one saw a ring. Melissa and Cole are one of the most private celebrity couples. It was director Ryan Coogler who accidentally told the world that Cole was married during an interview in 2016. Many fans were shocked to find out that Cole was married with a child.

“I’m a fucking successful rapper, who can literally at the drop of a hat go anywhere, do anything, have mad adventures,” the rapper said in an interview. “But there was no better decision I could have made than the discipline I put on myself of having responsibility, having another human being — my wife — that I have to answer to. Family can literally be the thing you always needed, bring balance and meaning and fuel your creativity, give you purpose.” 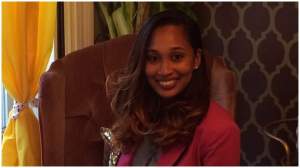 “Like many young teens, when I started college, I was unsure of the career path I wanted to follow,” Melissa said in an interveiw. “As the oldest of 4 and always being around kids, my natural instinct was that of a nurturer and caretaker. So I thought, “why not be a teacher?”

After realizing teaching was not her path, Melissa started an internship with a lifestyle and marketing agency, who, after two months, hired her as a freelancer. She went on to build her own event company, Statice Events. Melissa said the name “Statice Events” is a play on words of “status”, but it also is a type of flower that means success.

According to its Facebook page, Statice Events is an intimate event-planning company. The company covers all of the bases, from venue selection to event day coordination, to ensure a “flawless” events to be remembered.

“Working off of our client’s vision, we aim to take their special event to an elite level, by infusing our own expertise with their desires,” the description says.

3. Melissa is the Executive Director Of J. Cole’s Dreamville Foundation

According to its Facebook page, J.Cole established the Dreamville Foundation in October 2011 after experiencing life in New York City.

“At an early age J. Cole knew he wanted to be a rapper, and through his foundation he encourages urban youth to have dreams, believe in their dreams, and achieve their dreams,” the description says.

The aim is to uplift the urban youth in Cole’s hometown of Fayetteville, North Carolina, by bridging the gap between them and the world of opportunities that are available. He wants to reveal to the urban youth, their limitless potential, through positive life-altering experiences.

“I have been very involved with this organization as their Executive Director, helping to establish the organization and coordinate its events and programs,” Melissa said in an interview.

Congrats to @JColeNC and his wife Melissa Heholt. The couple reportedly welcomed their first child, a baby girl yesterday in North Carolina pic.twitter.com/iGeahRxwMp

Melissa and Cole reportedly welcomed their daughter in North Carolina in December 2016. It came as a surprise to many.

“J Cole flies so far below the radar that they can’t even find the man and his own wife in the same picture together,” Joey McNabb commented on Twitter.

J. Cole's wife just had a baby and no one knew she was pregnant, and just found out they were married… It's levels to this lowkey shit.

“J. Cole’s wife just had a baby and no one knew she was pregnant, and just found out they were married… It’s levels to this lowkey shit,” Paris Morgan wrote on Twitter.

5. A Lot of People Wish They Were Melissa

Forever wishing I was Melissa Heholt

Understandably so, many people wish they could be Melissa HeHolt. She is beautiful, successful, and has a wonderful family.

J. Cole and Melissa Heholt are my only relationship goals bc you rarely ever hear anything about them

“J. Cole and Melissa Heholt are my only relationship goals bc you rarely ever hear anything about them,” another user said.

Another user said that Melissa is the luckiest person alive.