The Bachelorette 2019 is nearing its end and its finale episode is set to air on July 29, 2019, as reported by Newsweek. But, it has been extended into 2 nights because of a major development since the finale was filmed. So, the finale episode will air on Monday the 29th, with the rest of the grand finale and the After the Final Rose Special airing on Tuesday, July 30, 2019, according to Reality Steve.

Monday, August 5th, 2019, Bachelor in Paradise will premiere and fans will see some familiar faces from Hannah Brown’s Bachelorette season, as well as past seasons of the series. Next week airs the Men’s Tell-All Special for season 15 of The Bachelorette and several of the men appearing on the show will be on BIP this season.

Now that you know the dates of the season 15 Bachelorette finale, let’s get into some finale spoilers. For those of you who do not want to know who the reported winner is this season or what happens on the After the Final Rose Special, STOP READING NOW.

Well, let’s get started with the final 2 contestants – Jed Wyatt and Tyler Cameron. Hannah Brown accepts a proposal from just one of them and the winner this season is reportedly Wyatt, according to Reality Steve. But, it is not a truly happy ending for the couple.

After reports that Wyatt had a girlfriend up until filming The Bachelorette came out and claims that he was only on the show to further his career, Brown reportedly has broken off their engagement. And, according to Reality Steve, their break up will be shown on the After the Final Rose Special. Reality Steve revealed, “Due to the nature of this season’s ending and everything that’s happened post-show, ABC hasn’t officially announced it but there’s going to be a 2-night finale on July 29th & 30th … It all depends on how they’re editing that 2 night finale. It’s possible we won’t see Peter get eliminated at the overnight date rose ceremony until the beginning of part 1 of the finale on the 29th.”

Luke Parker Returns to “The Bachelorette”

But, that is not all the drama that fans can expect to see on the finale episodes. According to TV Insider, this season’s villain, Luke Parker, returns to the show with an engagement ring after leaving. Show host Chris Harrison stated, “This is going to change everything because he went out and got a ring and he demanded to see you. He is fully convinced that you are his wife, that you are the one. He has a ring in his pocket right now. He is ready to propose to you.” Yikes.

After the overnight dates, Hannah Brown sent Parker home in a very cringe-worthy scene. After Parker spoke to her about not wanting to be with her if she slept with other guys on the show, Brown became upset and very offended. Brown told him that her husband would never talk to her the way he has and he would never judge her. In turn, she wanted him gone and told Parker that she does not want him to be her husband.

In a promo clip for the next episode (aside from the Men’s Tell All), Parker is shown returning to the show to prove that he would accept Brown, despite her sleeping with other contestants. This does not go over well. The other men confront Parker, as does Brown, who tells him to leave. It’s clear that Parker is determined. 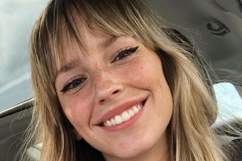