Getty The Emmy Award on display in Los Angeles.

Tonight was the time to celebrate the best in TV, but that was far from the only thing that fans were expecting to see. As with every year, the Emmys did not disappoint when it came to trendsetting styles and classics that never seem to fade away.  It was evident from the first arrivals that this was going to be a night of high fashion.

Here are our picks for the top 5 dressed celebrities from the night:

GettyAnnie Murphy from the series Schitt’s Creek arrives at the 2019 Emmy Awards.

The Schitt’s Creek star showed off in a way that would make Alexis Rose proud. Not that Annie herself doesn’t have a lot to be happy about herself. The series had its first nominations this year and it’s going into the final season starting in January.

The young star looked glowing in a gown that would make even the adults there jealous. She can currently be seen on the long-running series This is Us as well as the DC film Shazam. She’s also got a great role coming up as the actress appears in the new HBO series Watchman. It’s a certain departure from This is Us and one she is more than game to handle.

This was a great night for Jodie Comer. Not only is her series Killing Eve up for best series, but she and co-star Sandra Oh are going head-to-head for the honor of Lead Actress in a Drama Series. It would be no surprise if she shows up among nominations for years to come. The role of Oksana Astankova is one that takes twists and turns that lesser actresses might fail to grasp. 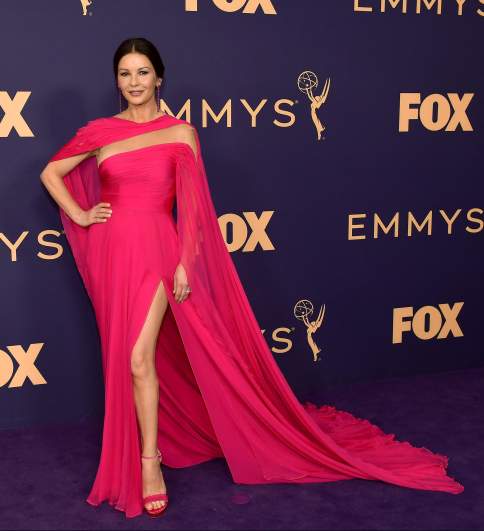 In arguably the best look of the night, Catherine Zeta-Jones came with a look that was both classic and on-trend. While she was not a nominee tonight, her husband Michael Douglas is up for one of the major acting categories of the night. Don’t mistake that for a lack of projects on her part; she was last seen in series one of Queen America. In it, the actress could be seen in the role of Vicki Ellis, someone who would do anything to maintain her status and power among the world of beauty pageants.

Scandal may no longer be on the air, but Kerry Washington is still showing why she was the perfect choice to play Olivia Pope. Defying the skirt or ballgown, she goes a crisp white shirt with black sparkling pants. The actress is still busy, with a project announced for 2020. Little Fires Everywhere, based on the novel by Celeste Ng, gives Wallace the chance to explore the lead character of Mia Warren. As the character moves to a new town, the secrets begin to unravel and the results will surprise everyone.