Getty Will There Be an 'It Chapter 3'?

The promotional material for IT: Chapter 2 suggests that it will be the end of the Pennywise saga. That said, director Andy Muschietti has hinted at the possibility that he has more stories to tell, and that he is open to the possibility of directing a third film in the IT franchise. But what would be it be about? Will the ensemble cast of kids and adults return? Read on for more details about the rumored IT: Chapter 3.

During a recent io9 interview, Muschietti talked about a potential third film and where he would like to take the franchise’s mythology. “There is a whole mythology to the book. Mythology is something that always has opportunities to explore,” he explained. “It [aka Pennywise] has been on Earth for millions of years. He’s been in contact with humans for hundreds of years, every 27 years. So you can imagine the amount of material. It’s always exciting to think of eventually exploring this mythology. It’s very exciting. But, for now, there’s nothing on the table.”

Director Andy Muschietti Has Teased the Possibility of an ‘IT: Chapter 3’

This Thursday, IT comes to an end. Get tickets at the link in bio. #ITMovie

IT: Chapter 3 would make sense for all parties involved. For Warner Brothers, the property has proven to be incredibly successful, with pre-ticket sales through the roof and a first installment that ranks among the most lucrative horror films of all time. There is, however, the matter of staying faithful to the source material. In the original Stephen King novel, the “Losers Club” manage to defeat Pennywise as adults, and rid their hometown of his malevolent presence.

Bringing the clown back for a third installment would threaten to take some of the impact out of the club’s victory. That said, Muschietti’s comments did leave the possibility open for different narrative paths to be taken. Since Pennywise has been around for millions of years, it’s possible that the third film could be a prequel, and take place before the events of IT: Chapter 1. If so, it would feature an entirely different cast of characters.

Muschietti Has Said That ‘IT: Chapter 3’ Could Serve as a Pennywise Prequel

Muschietti has discussed the interludes in the book, and how they detail accidents that Pennywise caused in the past. He teased the possibility that he might revisit these interludes in a later installment. “Don’t raise your expectations too much [for Chapter 2],” he warned. “The interludes in the book are amazing, there’s so many cool episodes and the Brady Gang and the Silver Dollar, and the Black Spot. There’s a bit of that, but I think those events in the past might be more suitable for the future.”

Muschietti also talked about Pennywise as a character, and how there is so much about him to explore. “Everything that relates to Pennywise and Bob Gray is very cryptic, and it’s like that for a reason. Probably the success of that character as a monster, as a villain is because of that crypticness and uncertainty that people have towards him,” he explained.

“We don’t know exactly what he is, where he comes from, or how Bob Gray is related,” he added. “Was Bob Gray a real person? Is he incarnated in that thing because Bob Gray played a clown? That’s all we know. So there’s a lot of speculation in the book and I think it’s wise to keep it cryptic. So you’ll find new things, but not too much.”

IT: Chapter 2 is now playing in theaters nationwide. 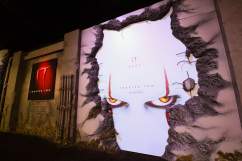 Read More
Horror, Movies, Stephen King
Find out whether the director and cast of the 'IT' series are interested in doing a third film.